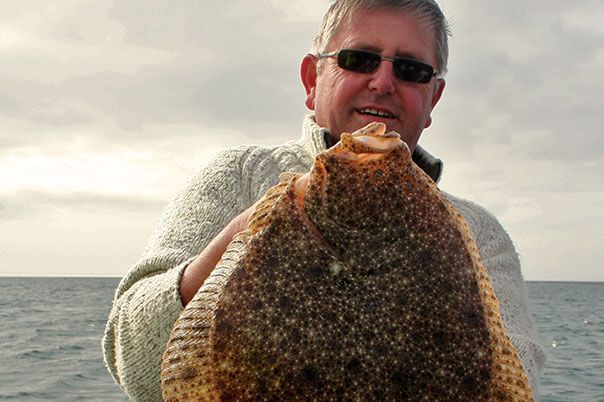 I walked along the busy harbour peering into the clear waters, as anglers have a tendency to do. Tucked away in a quieter corner an angler was flicking pieces of bread onto the water. A mullet angler for sure I thought and paused to ask if he had succeeded yet. He replied that he had been broken by a large fish and had seen several others. I was immediately transfixed and peered into the water hoping for a glimpse. Suddenly a huge mullet of close to 8lb emerged from beneath a boat and devoured a piece of floating bread. If only I had packed my mullet tackle! 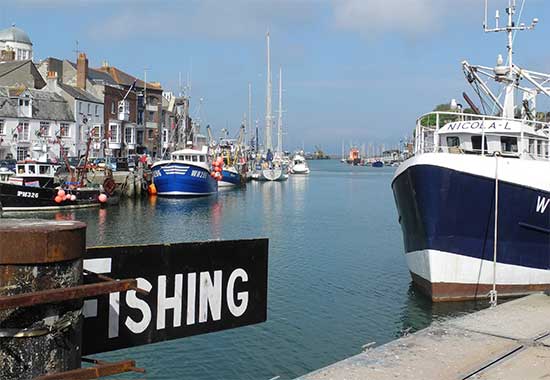 I was there for a trip the following day aboard renowned charter boat, “Flamer 4” skippered by Colin Penny who has a well-deserved reputation for putting anglers amongst quality fish over a period of close to 20 years. The choice of a first class skipper is of course vital in the search for specimen fish.

I was full of optimism when I joined the boat full of keen anglers who were competing in the annual Ammo Baits competition that had been brought forward into late May in order to avoid the Olympic events that were to make Weymouth exceptionally busy.

We sailed out of Weymouth Harbour at 7.00am heading out to fish the famous Shambles banks and the mussel beds that continue to yield outstanding catches of turbot, brill and plaice. Earlier in the week two friends had taken a trip with Colin and had landed personal best plaice of 4lb 10oz and 5lb 10oz and had also witnessed the capture of a huge plaice scaling 7lb 8oz.

Ian Tyldesley and his wife Michelle were on board for the trip and were sponsoring the event, providing quality bait and prizes. The event was a flatfish competition with points awarded for each flatfish caught and additional points added for each species of flatfish accordingly.

Flamer 4 is a fast modern charter boat with ample deck space for ten anglers and all their kit. A Pro Charter P4 39 feet, powered by an Iveco 450 hp turbocharged diesel engine. It reaches the Shamble banks in around 45 minutes giving plenty of valuable fishing time.

The morning had dawned with light cloud and occasional sunshine with just a gentle westerly breeze. Colin informed us that we would start the day drifting for turbot and brill. So out came the required traces, three foot traces of 50lb mono terminating in a 3/0 to 4/0 hook. These were fished on a running set up with an 8oz to 10 oz lead. I noticed that like myself all on board had their reels loaded with braided line. Bait would be a long strip of top quality frozen Ammo mackerel. 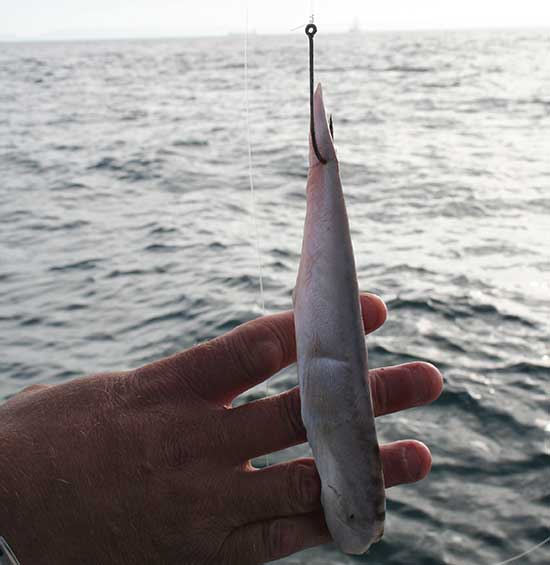 As the boat bounced across the water friendly banter filled the air as those on board reacquainted themselves with familiar faces or struck up conversations with new ones. I always relish the social aspect of boat fishing and the air of camaraderie that develops. The anglers on board had travelled from far and wide for the day with some enjoying multiple days and others just the one. The journey out in the early morning light is always to be savoured with the ever-present sea gulls shadowing the boat and graceful gannets wheeling in the sky as they search for prey beneath the clear waters of the English Channel.

On arrival at our carefully chosen destination Colin manoeuvres the boat into position; switches off the engine and shouts his encouraging cry; “Get em down”. At this point ten baits descend on their way to the seabed.

With the baits down searching the seabed Colin puts the kettle on and Michelle Tyldesley takes the opportunity to engage in a friendly quizzing session establishing where all have travelled from and what they have caught previously.

Dave Jenkins is the first angler to hook into a fish and is delighted with a plump turbot. Colin measures the fish and declares it should be returned. A strict size limit of 45cm across the back is imposed to help protect valuable stocks of these sought after flatfish. In my own view it would also be a good idea to return larger fish of over 10lb that have a high value as sport fish. Though turbot are undoubtedly a culinary delight and are perhaps the best tasting flatfish of all, conservation of stocks is paramount. 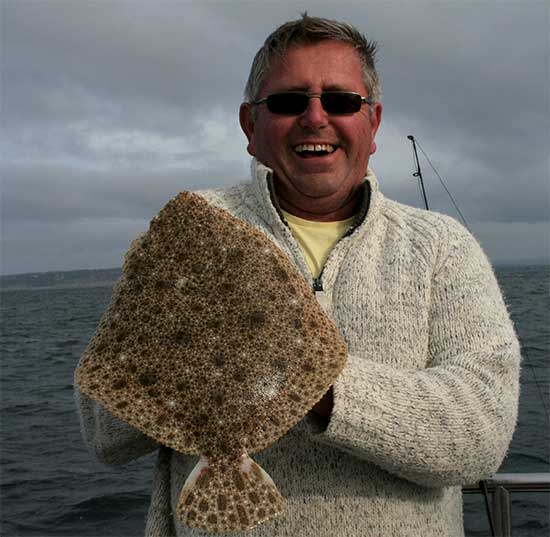 Dave Jenkins with the first Turbot of the day

Persistence is the key when drifting for turbot and brill with potential long periods of inactivity. Our first three drifts resulted in at least a couple of turbot and a solitary brill. The tally includes two turbot to my own rod the biggest a modest specimen of around 6lb. The ultimate prize of a specimen turbot is highly impressive when it comes, as Peter Gillet discovered when a fine specimen scaling 15lb seized his mackerel strip. 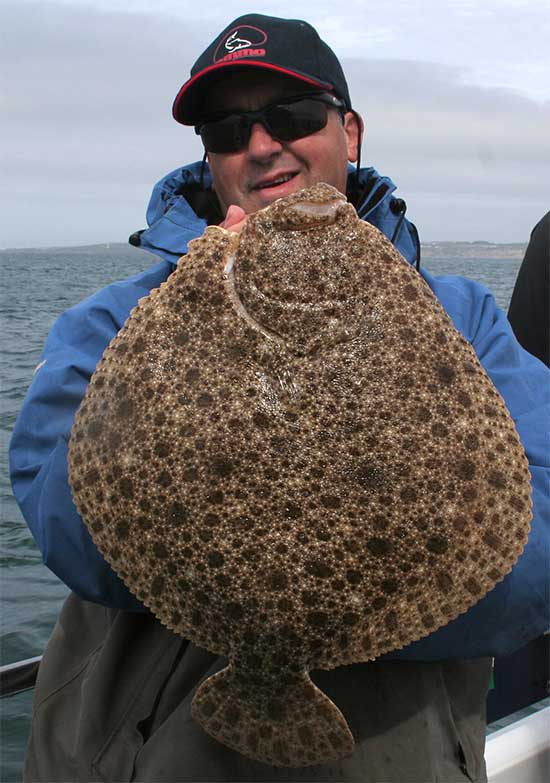 The 15lb turbot was a splendid sight and I can only imagine the spectacle of the best turbot to have been boated on Flamer 4 a superb fish of 28lb. The British Boat caught record was landed off Salcombe Devon, in 1980 and weighed 33lb 12oz. The brill record was taken off the Isle of Man in 1950 and scaled 16lb. The best brill taken on Flamer 4 weighed a creditable 10lb 2oz. 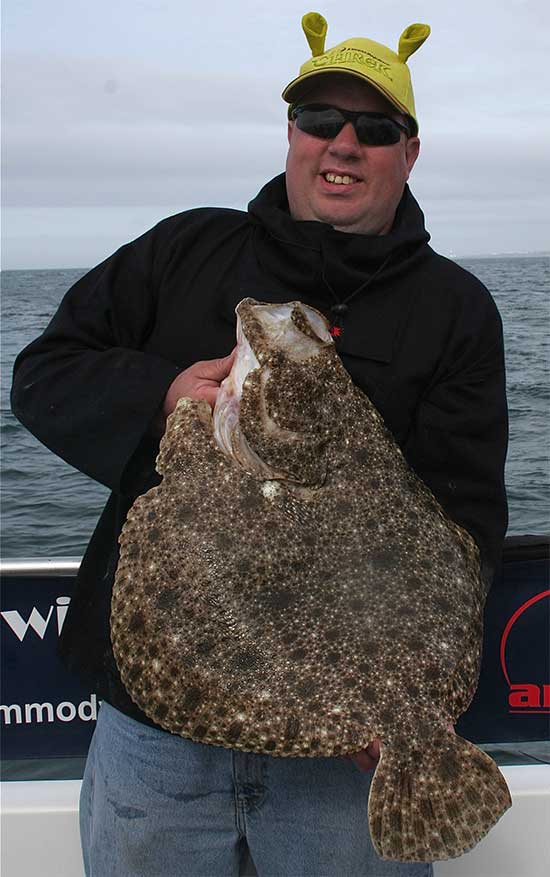 Peter Gillet with his 15lb turbot

TIME TO GET ON THE MUSSEL
As the tide eased the turbot and brill appeared to go off the feed and the inevitable dogfish began to come on board. Colin had expected this and declared it was time to relocate to the mussel beds slightly closer inshore towards the imposing landmark of Portland Bill.

Plaice were our target species here and fresh traces were clipped on with most opting for plenty of attractor beads. Traces culminated in 1/0 Sakuma hooks baited with Ammo frozen black lug tipped with squid or alternatively, king ragworm tipped with squid.

The strong tides and rough bottom here demand that anglers use heavier tackle than that used to target plaice on other areas such as the as Skerries off South Devon. Leads of 6oz to 8oz matched to 20lb Class tackle being the standard set up.

Again keeping control of tackle is essential when drifting and as soon as a plaice is detected at the bait, line needs to be paid off the reel enabling the flatfish to devour the offering before the drifting boat snatches it away.

The first mark we drift is quite snaggy and several members of the party suffer bent hooks as they wedge between mussels or rocky ledges. A diver told me that the beds consist of flat rock platforms covered in pea-sized mussels that the plaice feast upon. He told me that the plaice could be easily observed as they stood out well on the dark background making them as easy target for the spear fisherman who may struggle to see the fish over the sand more often associated with plaice. I asked Colin Penny if anyone used mussel as bait and he replied that it seldom worked. We also discussed the use of garlic-flavoured prawns that have proved highly successful on the Skerries. There may well be room for experiment.

This first mark did not prove as productive as hoped. Three days previously it had yielded plaice of 4lb 10oz, 5lb 10oz and 7lb 8oz. Though I did tempt a dab that was to prove a valuable source of points in the match!

A move to a new area of mussel bed proved far more productive with a steady stream of plaice being brought to the boat the best of which fell to my rod and probably scaled around 2lb 8oz. I always think of the plaice as the classic flatfish with their vivid orange spots and brown attire. 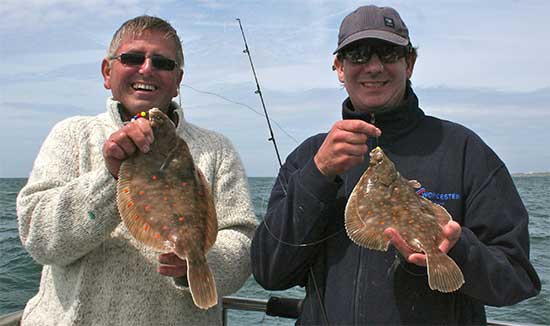 The tide began to flood all too soon and it was the plaice that now seemed to stop feeding. It was time to head back out to the Shambles for another couple of hours drifting. The first few drifts brought a couple for turbot to add to our tally. But it was not as productive as the morning session. My guess for this slowing of sport was an increasing westerly breeze that was now blowing the boat along with the tide creating a drift that was perhaps a little too fast.

It was time to head back to Weymouth after close to ten hours fishing. As Colin headed back inshore waves crashed against the bows of the sturdy boat send spray over our heads. Seagulls as ever escorted us back to the harbour and I am sure we all looked forward to a return trip with Colin in the not too distant future.

Moored up in the harbour it was time for the presentation of prizes and with the points system that was in place I was surprised to find that it was myself who had secured top spot. The winning factor being the dab that had given me an extra 10 bonus points for the additional species. But then as the old adage goes you make your own luck or cultivate it. In truth with the anglers on board anyone of us could have landed the top prize as all adopted the tactics laid out within this article. 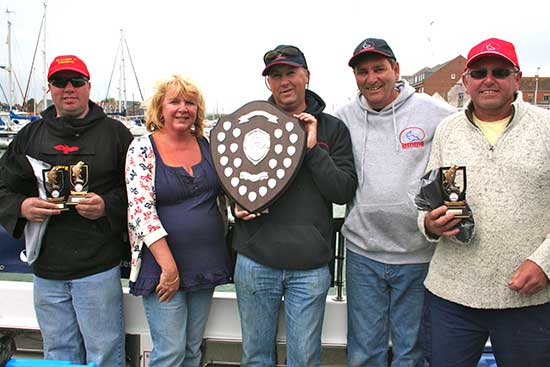 I stayed at the Ashmira Hotel that proved an ideal location with parking and ample facilities. An added advantage being that the owner Roger Wilson is a keen boat angler. For details contact: – www.ashmirahotel.uk.com