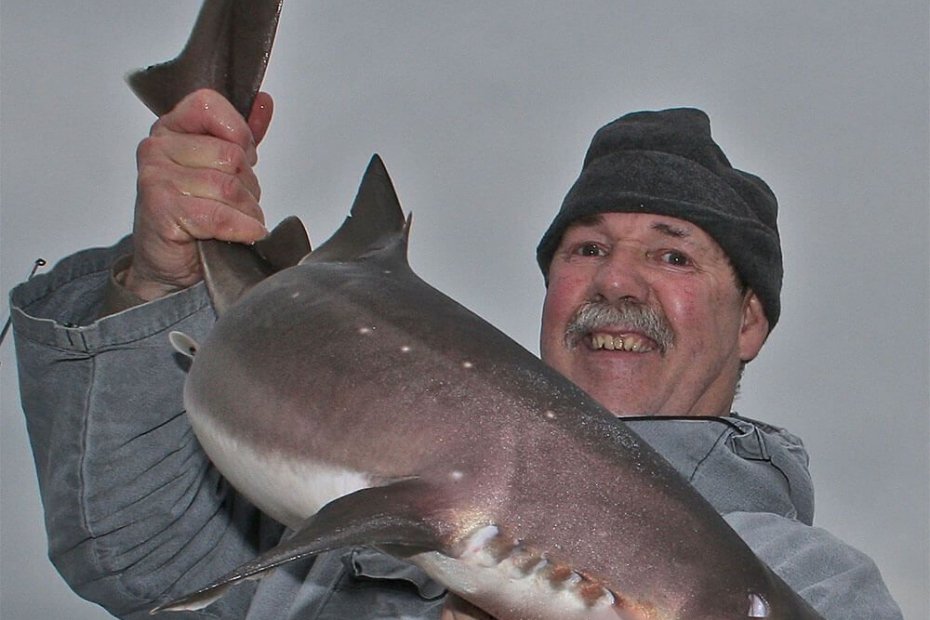 The Bristol Channel off North Devon is an exciting area for boat anglers throughout the year and a small number of Charter boats are now taking anglers to offshore marks all year round. Whilst cod are scarce during the winter months there has been a boost to winter sport since commercial fishing for spurdog ceased. Exciting sport is now enjoyed between November and late March as ravenous packs of spurs roam the deep offshore waters.

I joined a party of local anglers aboard Ilfracombe Charter boat “Blue Fin” skippered by John Barbeary who has a wealth of experience gained over thirty years whilst engaged in both commercial fishing and chartering. We waited upon the quayside a short time for the tide to float the boat chatting enthusiastically about prospects and fishing in general. As always banter began early between familiar faces whilst those new to the boat observed with a small degree of trepidation.  We all agreed that it was great to be out at last with the prospects of a day’s boat fishing ahead following many cancelled trips following some atrocious spells of weather. Boat angling is a delight on a calm sea but an endurance test when the wind blows.  Kevon Jefferies came out with a memorable ode. “ Better to sit in a pub with a pint and a stew, than sit in a boat having a spew.” A big swell was pounding the shoreline as we sailed out to sea past the controversial statue “Verity” created by famous locally based artist Damien Hurst. Whatever your view on the artistic merit it has to be acknowledged that it has created a considerable boost to the local tourist trade. Verity and Ilfracombe soon disappeared into the distance as “Blue Fin” sped up channel powered by 315 HP Yanmar-twin engines that can propel the boat at up to 25knots. Within half an hour we anchored up within sight of Britain’s highest and most spectacular sea cliffs. Over a thousand feet of rock face stretched to the skyline, scarred in places by massive landslips triggered by the recent torrential rainfall. Tell tale signs of long since abandoned iron ore mine workings can still be seen on the cliff face monument to a pioneering generation who undoubtedly strived hard to extract wealth from a hostile and wild terrain.

The boat settled at anchor and baits were sent down into the strong tidal flow. Mackerel and squid baits impaled upon 6/0 hooks, heavy mono or wire hook lengths. This was only to be a short stop fishing as the tidal flow eased enabling us to steam out to the generally more productive grounds several miles offshore. A succession of small bull huss, conger and dogfish were soon swung aboard before John declared it was time to up anchor and steam out to sea. Grey skies stretched to each horizon and a powerful smooth swell caused the boat to rise and fall slowly at anchor. The strong tide rushed past the boat giving the impression that we were in the middle of a big river. I clipped 1lb of lead to a Clements boom and sent a squid and mackerel cocktail  steadily down into the murky depths touching bottom 50 metres below after several seconds of descent. I was glad to be using 50lb Berkley Whiplash Braid in Hi –Vis Orange this strong line with a thin diameter enabled the use of lighter weights and ensured positive connection between rod tip and sea bed.  I did not have long to wait before the rod tip nodded vigorously as something far below tugged at the bait. When I was sure the bait was within the fish’s mouth I tightened the line cranking the reel handle until the rod tip was locked over with the weight of the fish. It was then a case of pumping the rod up and maintaining a steady pressure coaxing the fish towards the surface. It was to be the first spurdog of the day a fish of around 8lb and one of the smallest we would catch. I had been watching with interest as my fellow anglers pulled their spurdog rigs from bulging tackle boxes. Above each hook was a large Muppet; these were exposed to bright torchlight to recharge their luminous qualities. I enquired as to the effectiveness and was told that on numerous occasions the addition of a luminous Muppet or set of beads had dramatically improved catches. I had an open mind and treated the addition with a degree of scepticism. Surely in deep water the most important factor would be a strong scent trail from quality bait! I was using Ammo frozen mackerel and dirty squid and had every confidence that this would be effective. Various fish baits also worked well including fresh whiting and herring. A succession of spurdog were landed many of them topping Combe Martin Sea Angling Club’s Specimen size of 14lb the best falling to the rod of Craig McLaughlin tipping the scales to 16lb. Bull huss were also present the best a fine fish of 13lb falling to the rod of Dave Shapland. Sport eased off as slack water arrived but as soon as the tide began to run hard sport improved. A frantic spell of action was enjoyed with multiple rods bent as spurdog were brought protesting to the surface. I am sure that the constant lowering of fresh baits emitted an attractive haze of scent that brought the spurdog into a feeding frenzy. Within seconds of the bait hitting the bottom a sharp rasping bite would be felt as members of the marauding pack tore into the bait. Eventually the tidal pull became too strong and even 2lb of lead struggled to hold bottom. It was time to head back inshore and once more try our luck closer to the towering cliffs of the North Devon coast. Sport here was slower with occasional conger, huss and dogfish. We hoped for big cod or ray but these did not come and we reflected upon a few hours great sport. We had landed well over twenty spurdog many into double figures, numerous bull huss to 13lb, conger to twenty pounds along with dogfish, whiting and pouting. Dave Shapland had also hooked into a very large fish that had shed the hooks within seconds of being hooked, conger, tope or big cod?

The cessation of commercial fishing for spurdog and huss has given stocks a significant boost with these fish now providing an exciting and viable recreational fishing opportunity that boosts the income of Charter boat skippers and in addition bringing welcome visitors to the Victorian seaside town. If current trends continue anglers off Ilfracombe will catch spurdog in excess of 20lb.

SPURDOG
A common small shark that lives in deep water easily distinguished from tope or smoothhound by the sharp spines at the front of the dorsal fins. It is a fiercely predatory species that feeds heavily upon shoal fish such as herring and sprats.

TACKLING UP FOR SPURDOG

ILFRACOMBE
Victorian Seaside town with plenty of B &B and good opportunities for shore fishing situated within a popular tourist area.