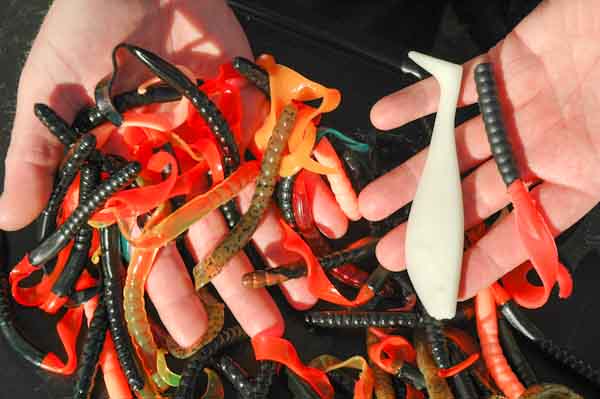 There has never been a lure anywhere near as successful as the artificial eel. It has been responsible for untold specimen pollack and coalfish off the wrecks, bass and pollack of the shore. It’s safe to assume that just about every saltwater angler carries a few in his box.

Like wise the muppet, which is a cod catcher, as well as pollack over the wrecks, and also the devastatingly effective lead headed worms from both shore and boat.

Their combination of soft body that creates lifelike movement is the key to their success. This feature picks out the best ones, the best colours, and how to rig them for the best results.

SIZE MATTERS
There are three main types, the Redgill, Delta and Eddystone eels all having that flat rudder like tail that wags when retrieved.

All cover the size ranges from 70mm upto about 210mm, but the Eddystone (these go by numbers, 5 being the smallest size) do a larger 270mm size.

It’s worth carrying the full range of sizes. Off the shore, obviously the inshore sandeel are the smaller varieties and the 70mm and 112mm and 175mm are the ones that catch the most fish. The 70mm will attract mackerel, small pollack and school bass, with the 112mm and 175mm versions being the ones to choose for bigger bass and pollack off the rocks.

This sizing is critical. If you’re fishing with a 175mm eel and the natural sandeel the fish are feeding on average 112mm, then the fish will shy away from your lure and vice versa. Bass, especially are prone to this.

Over wrecks when after, pollack and coalfish, the same sizing principal applies. It’s still worth having those smaller 112mm eels, as the pollack can be fussy, but mostly you’ll be wise to start with sizes 175mm and 210mm from the off. It’s these that take the bulk of the fish.

The Eddystone No 1 at 270mm simulates a large launce eel perfectly, and these are common over the wrecks from time to time. If all the anglers aboard are fishing with the range of smaller eels and few if any fish are being caught, do the opposite and put on the big Eddystone.

When trolling for bass and pollack, the best catchers are the 175mm and 210mm sizes. There is rarely any need to go down smaller over the reefs.

COLOUR COUNTS
All the patterns come in a wide range of colours and all will take fish at some time. But over the years certain colours have dominated regards fish landed. Black is a must for both shore and boat. It gives the best silhouette and target outline for the fish to hit, even at depth because the fish are hunting from below the sandeel shoals and not amongst them.Red is next and it’s no surprise to find that red is the first colour to lose it’s hue when dropped through the depths and appears black, again the outline for attack is there. For trolling and shore spinning, white is excellent and looks like a true sandeel when viewed by fish in clear, sun reflecting water.

The other colours to carry are the silly ones like fluorescent orange and yellow which tend to pick out the coalfish and also pollack when their feeling contrary.

For shore fishing, white is the best daytime colour and black for night time when the fish hit the lures from deep below against the lighter sky.

EEL ART
You can modify the appearance of the artificial eels by using a permanent marker pen. For instance, a white belly/green backed eel can have vertical black stripes added to create the illusion of a mackerel. A red marker dabbed behind the gill moulding adds a hint more life to the eel, and try enlarging the eye which can often help trigger a strike when fish are slow and lethargic.

There was a fad some years ago where bass were being caught off the Sussex coast on eels sprayed with fluorescent paint. It’s something else to consider for those difficult days when fish seem uninterested.

RIGGING
For shore spinning you’ll need a three way swivel. Tie your reel line to the top eye of the swivel and 3′ to 4′ of light 10 to 12lb line to the lower swivel eye and add your eel. The weight which should be a bomb shape is clipped to the middle swivel eye. This rig allows the lure to fish in a straight line with reel line and behave naturally. It’s okay for casting, but you do get the odd lure twisting round the main line during the cast.

Over wrecks and reef, then you’ll need to incorporate a boom. At the end of your main line tie on a stainless steel french boom at least 10″ long. It’s best to use a swivel to connect the boom to the line to help reduce some of the twist created on the retrieve. Use a small, weak paper clip to attach the lead to the bottom of the boom. The 15-18lb hook length needs to be upto 18′ long when the tide is running, but reduced to 10′ as you approach slack water. If you fish with a long trace over slack you” get the most horrific tangles as the trace cannot stretch out with the current.The same rig is also the one for reef fishing, but on shallower reefs you can use a shorter 8″ boom and reduce the hook length to 6-10ft, depending on the tide and depth.

MUPPETS
The sizes to carry are the 3″, 5″, 7″ and 9″. The 5″ and 7″ being the best. They have limited shore appeal, but are effective over wrecks and reefs for pollack and cod, or baited with a fillet of mackerel for ling when fished in conjunction with a pirk and worked up and down..

The colours remain similar to the eels with black, orange, yellow and red the most successful.

RIGGING
Nearly all anglers rig a muppet a wrong. If you push the hook point through the pointed head end the plastic will split causing the muppet to keep pulling backwards over the hook eye and being pushed into the bend of the hook by water pressure.

The correct way is as follows. Heat the end of some 18 gauge wire and then melt a clean hole through the muppets nose. This creates a small hole, but with sealed edges that stops the chance of the plastic ripping. Slide the hook length through the hole, now add a large 8mm bead and then the hook. The muppet will butt up against the bead which is pushed up against the hooks eye with the bead spreading the load on the muppets plastic head. The hook needs to be a strong pattern like a Mustad O/Shaughnessy 6/0 to 8/0.

The rig to use is a pirk as the lure as bait and weight using 75lb line, then tie in a blood loop with the loop long enough to be cut to form the hook length. This needs to be positioned a good 7′ from the pirk so that if you hook a fish on the pirk and another on the muppet, the top fish can be landed with the lower fish still safely in the water.

KILLER GEAR
This is a slightly different set up that takes large numbers of fish from the wrecks when they are well populated. However, it is not a sporting approach, hence the name killer gear.

The rig needs to be 75lb line, 6-8ft long with two large blood loops spaced equally in between. Again make them long enough to form the hook lengths. Now add either artificial eels, muppets, or combination of the two with a pirk for the weight. Three fish at once on this gear is common.

LEAD HEAD LURES AND WORMS
Artificial worms For those in the know there is only one way to take reef pollack from the boats and that’s with a lead head worm worked sink and draw. The best are the genuine Mr Twister range now imported by Harris Angling, but there are many copies and all catch fish.

The smaller 4″ size do not always have enough tail action to catch the fish, but the 6″ have and can be devastating. These even catch when fished without a lead head and cast from the shore on the same rig detailed for the artificial eels.

Larger worms like the Mr Twister Phenom worm at 11″ is the better bet for fishing the wrecks with and it’s taken plenty of pollack well above double figures proving it’s effectiveness.

The lead heads available have previously been too light at upto .5oz and used for the American market, but now there are 1oz heads right upto 16oz ones designed for casting through deep water wreck fishing.

The 1-3oz heads are ideal for shore work targeting bass and pollack inside estuaries and from the deeper rock marks. Heads between 2-8oz are good over the reefs for pollack, while the 5-16oz versions get the worms down to the wreck pollack.

TWIN TAILS
Some companies like Latex Lures do twin tailed lures designed to increase the vibrations to attract more fish. Thee have proved popular for pollack over wrecks and reefs and the larger heads worked tight towards the base of wrecks have accounted for good cod.

These are especially good over wrecks and rougher ground because the attachment eye and hook are facing upwards keeping the hook away from the worst of the snags. The hook also acts like a form of keel and keeps the lure running evenly.

Whereas the single tails are best fished with a steady retrieve, the twin tails fish better raised, then left to fall a few feet before retrieving again. This sees the nose first rise upwards, then fall forwards giving the illusion of free swimming fish feeding in the current.

TIPS
When fishing an artificial eel on a flying collar rig, try fitting a Booby Bead rattle chamber just infront of the eel. It does improve the catch figures.

Experiment with killer gear by using two different colours of sandeel on the same rig. You’ll see that one colour catches all the fish and by changing the second eel to the same colour you’ll increase your catch.

In very deep water, try pushing a starlight into the open body cavity of a sandeel or worm lure, or slide a short length of plastic tube onto the line above a muppet and push the starlight into this.

The hooks supplied with all artificial eels except the 210 and 270mm versions are far too big in both size and wire gauge and you can “bounce” fish off. Replace these with Mustad Viking 79515’s between 1/0 and 6/0, depending on the size of the eel to eliminate this.

You don’t have to spend a fortune to enjoy bass fishing, the fact is cheaper lures can catch fish just as well as the more expensive lures can in the right circumstances. Mike Thrussell takes a look his five favourite, reasonably priced bass lures.

Plugs don’t have to be the latest and greatest twenty quid Japanese imports to be successful. Mike Thrussell takes a look at six of his best and most consistent bass fishing plugs that don’t cost the earth. 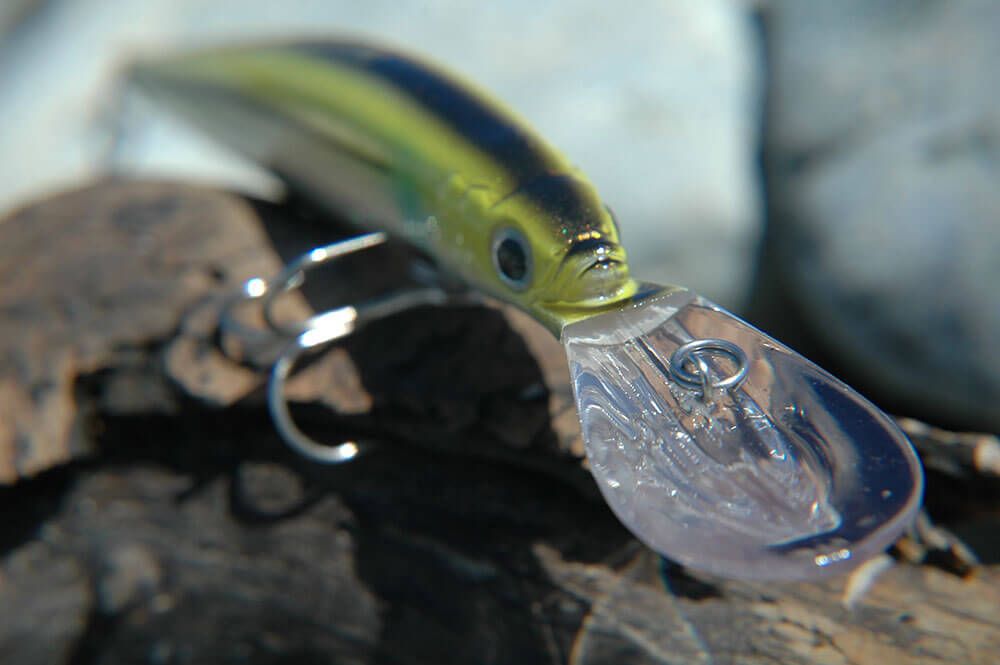 Plug fishing is fast becoming one of the most popular ways to catch bass in the UK, the natural movement and commotion caused by a spluttering plug stimulates the bass’ natural predatory instinct and drives them crazy! WSF takes a look at plug fishing for bass.