After a busy start to the year, I finally got out on the boat today.

The plan was to target some inshore Bass on lures and then head over to another mark on the South Llyn coast for Bream and Tope.

As I left Pwllheli marina I was greeted by a large pod of bottle-nose Dolphins, which is always nice to see. I stopped the boat and watched them for a while. The fishing could wait.

After around 5 minutes I fired up the engine and ploughed on to my first choice of Bass mark for the day. Conditions were flat calm and the boat was running really well (just touched wood here!) as we ran down the coast. I had two rods set up: one with a set of small sabiki’s suitable for Herring, Mackerel, etc; the other a lure rod (Tailwalk Eginn 88) which I bought at the back end of last year.

When I got to my first mark, out went the Savagegear Sandeel in Khaki which had served my so well on the mark last year. Surprisingly though, there was nothing doing. I went backwards and forwards, varying depths and retrieve speeds all to no avail. I push a little further afield and found the motherload of Pollack. Nothing big, all 3/4lb to a pound and a half. Six at a time if I put the sabiki’s down. I put a slow pitch jig on the Tailwalk to see if I could sort out a better stamp of fish, but to no avail. The same sized culprits kept coming up, time after time.

I decided to move on. The tide pull had begun to pick up close to my first mark. I was getting pushed along at 2.5kts. Sonar showed what looked like another big payload of Pollack sitting in front of a reef. “Here we go again”, I thought. But no! I felt a couple of plucks at the lure and then a solid take. This time the fish was significantly more belligerent. It took a minute our two to get it through to tide to boat and to my pleasant surprise it was the target species at last. A 3lb 12oz Bass. 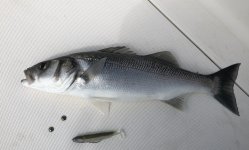 I returned to Bass to the water and my boat to the mark I just taken it from. Sure enough, there they were again on the sonar, sitting the tide in front of the reef. And once again, fish on! And a decent one too as it peeled line off my reasonably stiff-set drag. After another few minutes I got her to the boat but she tried everything to avoid coming aboard, even making a dash straight under the boat. I got her in the end. And at 5lb 10oz, she was close to my PB (6lb dead). 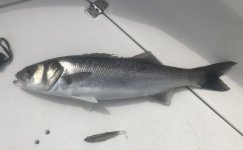 From what I’ve read, any Bass over 5lb is likely to be a breeding female. This one was quickly unhooked and returned too. Once again, I set the boat up on the same drift and once again, I was into a decent Bass. This time 3lb 8oz.

By the time I reset the drift for the 4th time, the tide had dropped significantly and the fish had moved on. Try as I might, I could find them again. I did however pick up a few Coley on a baby IMA Hound Glide thingy, which was nice to see. 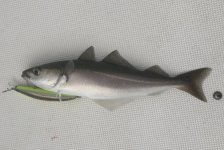 As the day wore on, all I could find were more Pollack and a shoal of Launce.

I began to work my way back towards the Tope mark, but too be honest I felt like I’d already had a good day. So I sacked it and headed home for a beer.

Hopefully back out again soon.

Send some over this way.

Yes it has been dead flat calm last 3 days.

Nice one! You don’t keep the eater 3-4lb bass then?

But yes, anything over 5 I’d put back unless it was gut hooked and bleeding

Some nice fish there, well done

Have you been out on the roads again without a Jeep? Give yerself a slap and don't do it again!
W

Mr Fish said:
Nice one! You don’t keep the eater 3-4lb bass then?
Click to expand...

Tbh, I’m still working through the Cod and Haddock from Shetland last summer (and gimme Haddock over Bass everytime)