North Wales Back for round 2.

After Tuesday’s unexpected success it would have been silly to go anywhere else on Thursday, so with altogether higher expectations, I set off for the same mark again. The winds were forecast lighter than earlier in the week, so I was hopeful of some easier fishing. I arrived to find that this time, the wind was actually offshore as predicted , however it wasn’t all good news, as I had been beaten to my favoured spot by 2 other anglers . It wasn’t as bad as it sounds though as I happened to know them, and just as I was clipping on my lure to start the session, one of the lads hooked what turned out to be a cracking bass getting on for 4 or 5lb

With my appetite well and truly whetted, I kicked off my quest with the same lure that had produced the goods for me 2 days before, the Lemon Meringue Swimmish, but just like on Tuesday, the session started off slowly. Over the next 90 minutes I tried several lures but the fish just weren’t interested in the Swimmish, Patch, Asturie or Komomo. I did see another fish though, when my companion landed a second nice bass of around the same size as his first

Soon after this my fellow anglers decided they’d had enough for one night, and I was able to move along the shore a little. The fishing was still slow but eventually, about 20 minutes before high water I had the first take of the evening. Annoyingly the fish missed the hook and the blank was still a distinct possibility. As high tide came and went, I missed several more hits and I was beginning to think it wasn’t my night, even worse, the light was now fading and my window of opportunity was closing rapidly

Eventually the light was almost gone and I only had time for a few more casts, when incredibly my lure was hit again and this time it was fish on. A short but nerve wracking scrap later and the blank was finally beaten, with a feisty 2lber

With a massive sense of relief I had a few more casts, but the bass had now vanished and it was time for a move.

A short walk later, I arrived at my next spot and after swapping the Swimmish for a weighted Mishna, again in Lemon Meringue, I waded out to begin part 2 of my quest. In the 48 hours since my last visit, I had been planning how to take advantage of the bass’s preoccupation with sandeel, I only hoped now that the predators and prey were still there

. I could see by the red light on my headlamp that the water clarity was still poor, but I didn’t dare switch on the white light to check for sandeel, in case I scared away any bass in the vicinity. I needn’t have worried though, as on my very first cast my Mishna was hit. Yet again the attacker missed the hook but that didn’t matter, as only 2 casts later I was connected to a very irritated silver thing. The fight was short but exciting and after a couple of minutes bass number 2 of the session was beaten

Just like on Tuesday, the rest of the evening was pretty hectic, and for every bite I connected with, I missed 3 or 4 more, but those fish I hooked ensured my tally kept rising steadily

After 3 fish on the cleaner ground, things went a bit quiet and as midnight approached I was thinking of calling it a night, typically though, bang on the stroke of twelve I was in again

For the next 30 minutes I kept telling myself that I really should be making a move for home, but the bass were well on the feed and I just couldn’t tear myself away

. The next fish was number 6 for the night,

But I couldn’t possibly finish on an odd number

, so I stayed just a little bit longer. Bass number 8 for the night, and number 30 for the year soon followed 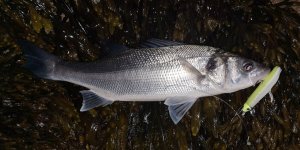 Though I knew I could keep catching indefinitely if I wanted too, the thought of getting up for work early in the morning lurked in the back of my mind, and so I reluctantly called it a night at just after 00:30.

So a week where I had to “make do” with a second choice mark due to the weather, had turned into a very productive couple of sessions, not only had I caught some fish but I had also learned a few things. Firstly, that a spot I previously considered to be a summer mark will produce earlier in the season, and secondly, that even the presence of algae in the water won’t put the bass off when there is a good source of food present

Roll on next week now, and hopefully some more good fishing

Nice one Andy putting the pressure back onto Kev

Excellent results Keep it up Andy!

Well done Andy, you are cleaning up on the bass at the moment 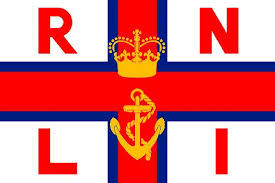