Another trip to Chesil but this time the other end at Cogden as I was hoping for Plaice and Sole. Makes quite a difference time-wise for me and I was there in less than two hours. The usual parking problems, ie how to pay. I had to download another App – ‘paybyphone’ this time as the machine wasn’t working. Had a quick look round the car park and there were no ‘machine not working notes’ in windscreens, so for peace of mind I thought I had better make the effort
There were about three other anglers on the beach closest to the car park, so I moved on a couple of hundred yards and set up camp to the left . It was now 4pm and low water was at 5pm so I had all the flood to fish. 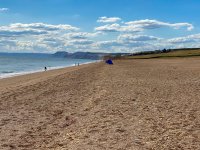 Threw out a couple of 2 hook loop rigs as far as I could with rag and frozen blacks on size 1 hooks. Fortunately weed was not much of a problem this week.

After a quiet 90 mins has a few pulls on one rod and brought in a double shot of a mini small-eyed ray and a mini smoothound. Couldn’t remember if I had already caught a small eyed for the species hunt (I had !) so took a pic with the card anyway. 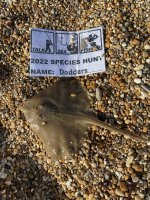 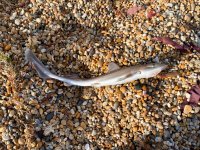 Caught another couple of smoothound pups and saw the chap 100 yds down from me land a plaice, so fingers crossed. I didn’t have to wait long and ended up with 4 plaice in the middle part of the flood. 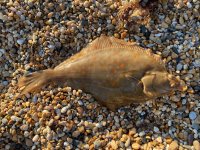 Changed one of the rods over to single size 2/0 hook with sandeel/squid/Mackerel combinations but this remained untouched until I packed up. 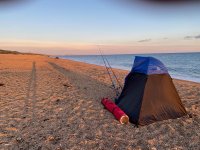 After dark the pouting and conger moved in with a vengeance, only small with the biggest only about 3lb (Eel, not pout !). One of the pouting had been mauled to death by something, a savage bite and I probably pulled it out of its mouth, probably an eel I guess

Packed up at high water.

great report, nice to hear the weeds thinned out. I will give it a wang tomorrow, lovely tide for it.

Nice session.Like the shot of Golden Cap(Seatown) to the west and Portland to the east.Not been to either this year.

Nice report & photos Mick, and a decent few species too. The Plaice looks to be decent size. Well done!

Have you been out on the roads again without a Jeep? Give yerself a slap and don't do it again!

That was the biggest but probably just made a pound. It'll be a keeper next year if it escapes the trawlers