Norway: The story so far

Sorry for the late report, these holidays are always so tiring.

So, @Tatunka joe @Ollieollie and @Jonnylongshanks met up at Heathrow on Thursday for the first of three flights to Norway.

I’d had no sleep and was also struggling with what appeared to be a cold (two covid tests agreed), so I wasn’t exactly on top form for travelling.

No flight delays or hassles and we arrived at Hasvik Airport on Soroya in deepest northern Norway at about 5pm.

Then the drama began

My large suitcase full of fishing tackle and anything fishing related, had not been on the flight.
A helpful reception chap promised to chase it up and said the luggage would be delivered to our lodgings.
I was gutted tbh, as I’d spent quite some building up that kit and not having it almost defeated the purpose for me.
I attempted (unsuccessfully) to look on the bright side and we boarded the minibus for our fish camp at Sorvaer Gjestehus. 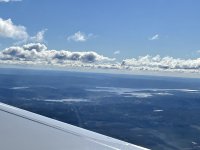 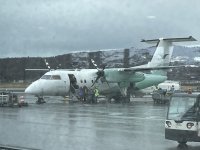 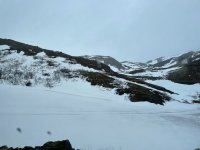 Even the Norwegians were sick of snow.

Anyway, our host welcomed us (a different host but I have been to this camp twice before). 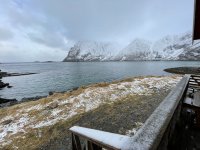 The view from our cabin.

Anyway, short story long, we got settled and oriented and I begged, borrowed and begged more tackle and clothing (oh yes, I had managed to woefully under pack for the cold weather

So we tackled up and headed out to a clise in cod mark for an exploratory few hours.

It was pretty rough and as soon as we stopped, so was I

Tat had a couple of keeper cod but I was hanging and after a short while they took pity on me and we headed back in.
Partly not having my sealegs but I think mostly just plain exhaustion as I hadn’t slept the night before all that travelling.

A good nights sleep helped and we were out the next morning after the plaice.
It was a bit slow but Ollie had a nice fish of about 2lb 8 followed by another around 2. 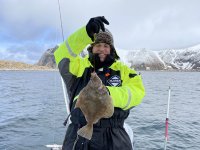 He closes his eyes in case the camera steals his soul…

We headed in for a bit and for the evening went back to the local cod reefs… MUCH better, this is what Norway fishing should be! 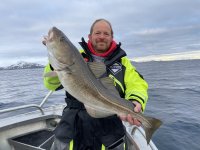 Plenty of cod about! 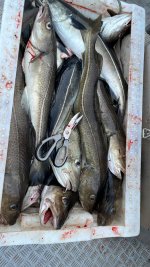 After filling our boots we moved to a bay around the coast where I’d had a few halibut a previous trip.
I can’t be doing with baiting much for halibut so opted for a pink Savage Gear lure.
It had barely been down fir a minute when I booked a rock… then the ‘rock’ began to move…!

Bloody halibut first drop, Christ! Shit me, forgot how herd these things pull!
I was knackered already and all I could do was hang on half the time as it kept diving back to the bottom.
Eventually it surfaced and Ollie did a very good job on the gaff while I collapsed in a gibbering heap. 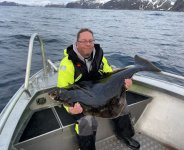 66lb by the weight to length although tbh it felt heavier. By local regs it was over rise and went back, but that was okay.

Tat had a hook up with one but it escaped and we continued drifting the bay with a few cod to show.
We moved the boat and then my rod dived again. Christ!
Didn’t really want another battle at that point and thankfully it was smaller, Aldo a keeper and a source of many fillets. 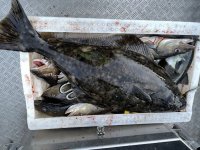 No more butts for that night and we headed in.

Saturday was a slow start. We went to ‘Butt Bay’ again but conditions were pretty evil.

We moved back around the corner and wow, there was a lot of cod! 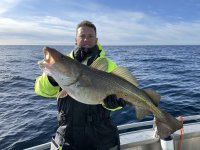 Plus Tat had a cracking 20lb coalfish, biggest I’ve seen in this area so far…. 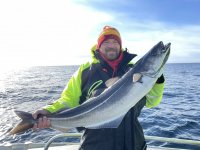 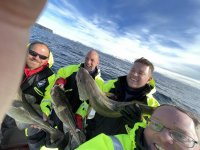 Hopefully the others will add a bit, but from my point of view it’s been about feeling ill, trying to get my case back and at the same time enjoy a holiday, lol

Great write up mate, some cracking fish especially your Halibut what a beast.! Major bummer about your luggage hope it arrives with you soon.

Great report so far mate. Incredible to think you have all had great fish like you have and you are not even half way through the trip!

Superb halibut Tony but that Coalfish that Tat had is an amazing fish and a brilliant photo too! Well done Tat!

Keep catching and keep the reports and pics coming guys! 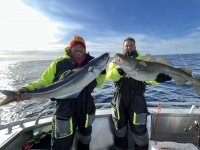 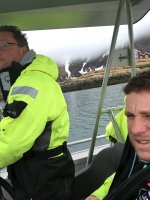 Looks great, if a little chilly.

Sounds like you are all pretty chilled , catching fish in the cold , well done guys some big fish there .
G

Well done all, some cracking fish.
Things look really challenging there, not sure I would be up to it these days…..I was happy sweating in my tee shirt yesterday…..

Awesome, fecking awesome, hope it carrys on for you

Awesome fishing.
Proper gutted your fishing case didn't make the flight.
Its nice to be important but its more important to be nice​

Brilliant report and awesome photos Tony! All four of you are catching some fine fish - monster Halibut and a lump of a Coalfish for Tats! Hope the suitcase turns up and you thoroughly enjoy the rest of your trip. Slightly jealous, but the cold would totally do my chest in. Stay safe & well over there!

Have you been out on the roads again without a Jeep? Give yerself a slap and don't do it again!

It ain’t that cold tony just had a beast

Cracking fish for the pair of you. Rather jealous of that coalfish Joe, I bet it went like the clappers.

Tatunka joe said:
It ain’t that cold tony just had a beast

Great stuff lads. Maybe you should try repurposing your love beads as as flattie attractors

Super fishing! If only we had stocks like that South of Shetland......
I hope your tackle arrives Mr F