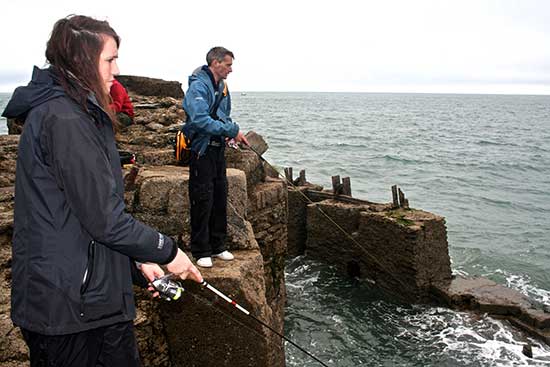 When Sea Ilfracombe approached Combe Martin Sea Angling Club to organize a fishing event to coincide with their Maritime Festival it seemed an opportunity too good to miss. A few months later on September 2nd Club secretary Nick Phillips and I (Chairman) found ourselves on a rainy Sunday morning erecting a gazebo with the help of local angler Chris Wilson and his wife Lynne.

The event we had put together involved a family fun fishing contest run on a simple scoring basis of 10 points per species and 1 point per fish. This should we thought reduce the risk of a tie that would have been likely if it was based purely upon species. In addition I had invited Nick Payne the Angling Trusts Devon Development Officer, Matt Mander and Jeremy Boyd from Inshore Fisheries Conservation Authority. I had also suggested that Ben Field from the Art of Fishing attend and give demonstrations on the latest lure fishing techniques. In particular the LRF branch of the sport that is creating a lot of interest especially in the clear waters of the South West. 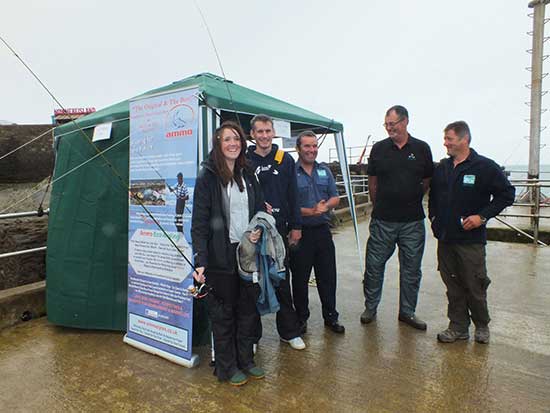 Our guests for the day

The weathermen had initially promised a dry weekend but it was not to be and the damp start to the day undoubtedly deterred a few anglers and their families. The event was due to start at 1.00pm and run until 5.00pm. As we waited for the start and the arrival of guests and competitors the Waverley Paddle steamer docked and offloaded its many passengers before taking on a fresh party for its ongoing journey to Lundy Island. The vintage craft made a stunning sight as it set sail recreating a Victorian scene in keeping with Ilfracombe’s Maritime history.

First time events always give some cause for concern as there always seems to be something that has been overlooked. Would all of our guests arrive? Would anyone arrive?

I am glad to report that our guests did arrive and immediately commenced discussions with those present. We had a few families, a few individuals and plenty of sightseers. Soon rods were tackled up and baits launched into the harbour. John Shapland and his family had made an effort to obtain some king ragworm and were immediately pulling in small pollack, wrasse and dragonettes.  Ilfracombe Aquarium had kindly provided a small holding tank in which to keep any small fish of interest to them. This also provided a point of interest for many young children and their parents who peered excitedly into the water. Every half an hour or so one of us would have to descend to the waters edge to obtain fresh salt water to keep the fish lively. 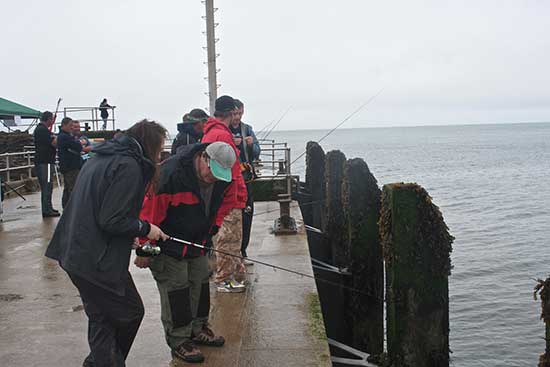 I had brought along a few rods for anyone to try their hand and several took the opportunity to have a go. Ammo had provided us with frozen baits and these were put to good use. Whilst several persevered with float tackle for mackerel and garfish the majority had more success fishing small baits on the bottom. No complicated rigs here just simple paternosters and small hooks.

Nick Payne from the Angling Trust soon started mingling with the young anglers engaging with them and sharing in with the fun as small fish started to succumb. Matt Mander and Jeremy Boyd from the Inshore Fisheries and conservation department talked with local anglers about the valuable work they undertake in preserving the marine environment. They also gathered valuable data for the latest sea angling survey 2012 that hopes to highlight the recreational angler’s value to the economy. I was delighted to see them engaging with the Angling Trust forging valuable communication links that will undoubtedly benefit angling within the region. 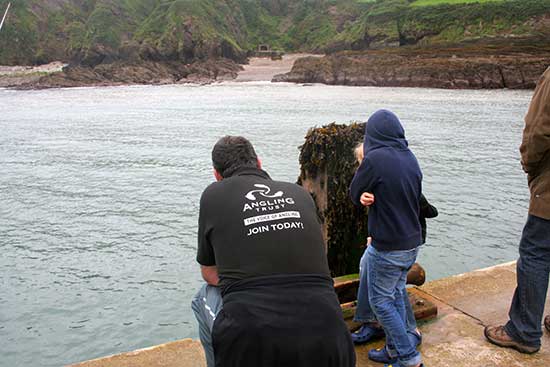 Ben Field had traveled up from Plymouth with his partner Jo and commenced searching for sport with their ultra light lure fishing tackle. The gear they were employing was an eye opener to a whole new branch of angling that had several anglers enthralled. The light weight rods matched with small fixed spool reels loaded with 6lbs braid and short fluorocarbon leaders of 4lbs cast the tiny lures an impressive distance across the harbour. Ben explained in detail how the tactics work and how to fish the small lifelike worms and fish imitations mounted on small jig heads. Whilst sport was far from hectic Ben did catch a small Pollock and lost what was probably a good-sized wrasse in the snaggy structure of the old pier.  I am sure that many will embrace this exciting and fun style of finesse fishing where even moderate sized fish give a spirited account. 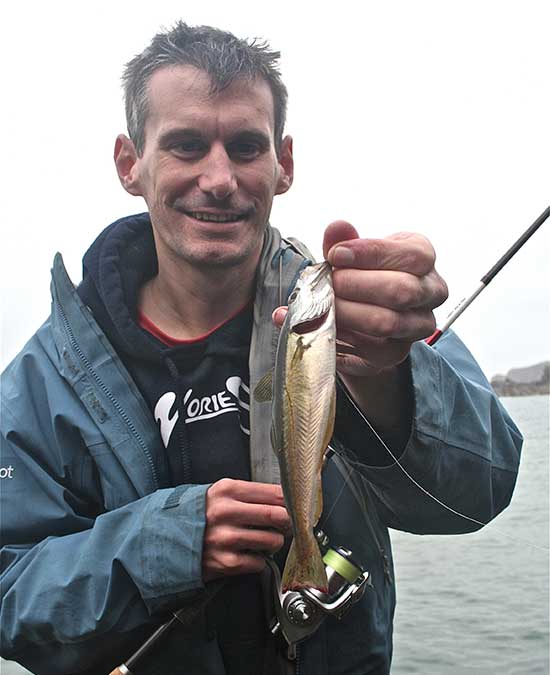 Ben Field with a small pollock

The day progressed with invaluable lines of communication set up between interested parties. Families and newcomers to sea angling had an opportunity to meet and gain experience from a few more experienced anglers. All in all, the entire entire event proved a success but also opened my eyes to one of the problems facing sea angling today. The newcomer to the sport is often faced with a huge learning curve and finds it difficult to become involved in club events. Sadly the majority of established sea anglers tends to fish in small groups and can become secretive and elitist in their attitudes.  There is a wealth of literature available for newcomers and the Internet is full of advice and forums etc however this is no substitute for hands on advice and tuition.

My 18-year-old son and his friends who have recently started going out fishing have further highlighted this to me.  Starting sea fishing has its challenges and there are vital things that anyone venturing to the waters edge needs to have an awareness of and top of this list has to be safety. First purchase for any would be sea angler has to be a tide table for tides impact upon where we can fish, when we can fish and if it is safe to do so. Second consideration has to be the weather conditions and thirdly where is there access, as large sections of coastline particularly in my local area of North Devon are privately owned.

As Chairman of an angling club I would always encourage newcomers to the sport to join a club and take the opportunity to meet experienced anglers.  This is however not as straightforward as it seems as many more experienced anglers can be a touch aloof and reluctant to embrace newcomers. Club membership can provide useful contacts for gaining access to areas of the coast where agreements have been negotiated with landowners.  The growth of social networking sites has dramatically improved communication among anglers and can be useful in getting newcomers together. Another hurdle to budding sea anglers is the demise of many local tackle shops. In the past the local tackle dealer was a good starting point for advice a place where anglers could handle the tackle and talk about their requirements many of these shops have gone unable to compete with the internet and mail order markets. 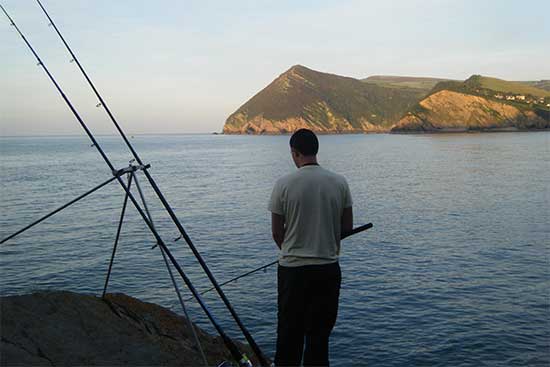 Taking all of the above into consideration if you are a sea angler with experience consider taking a new recruit out fishing. The experience can be very rewarding as I discovered when I took my son and his mate out fishing recently.

I chose to take them to a secluded rock mark close to Ilfracombe on the North Devon coast a mark that they would have had no chance of locating without intimate local knowledge. The rock gave access to deep water with a clear bottom and we had timed our trip to coincide with high water.  I helped them to select suitable rigs, tie knots and present the bait then enjoyed sharing the angling experience through less experienced eyes.

The hour before dark I suggested that they should employ a two hook rig baited with small mackerel and worm baits. Changing to pennel rigs and 3/0 hooks baited with squid and sandeel as darkness fell. As dusk descended Richard’s shouts of excitement caught my attention. The rod was bent well over as something out in the dark water battled for freedom. I gave advice and grabbed the landing net scrambling down to the base of the rocks. Soon in the light of the headlight came the thrashing shape of a large fish. For a moment I thought it might be huge bass but as it came closer I realised it was a decent sized conger. Richard and James gave exclamations of excitement as I managed to scoop the eel from the water. At just over 15lb it was no monster but at this point I realised that what is a routine capture to a seasoned sea angler is a virtual monster to a young recruit. 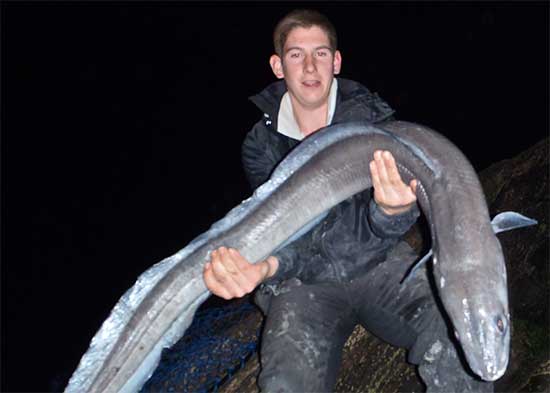 Richard Tucker with his 15lb conger

Driving home that night listening to the excitement as the capture of the conger was retold I took stock and thought how in time we gain experience and set our goals ever higher until some anglers eventually lose sight of the joy of catching fish.  Perhaps it is this realization that is resulting in anglers trying out new approaches to angling such as the LRF fishing mentioned earlier where each capture is savored for the moment. Whilst I will always seek those outsize specimen fish I will also try to value those lesser specimens I catch along the way.