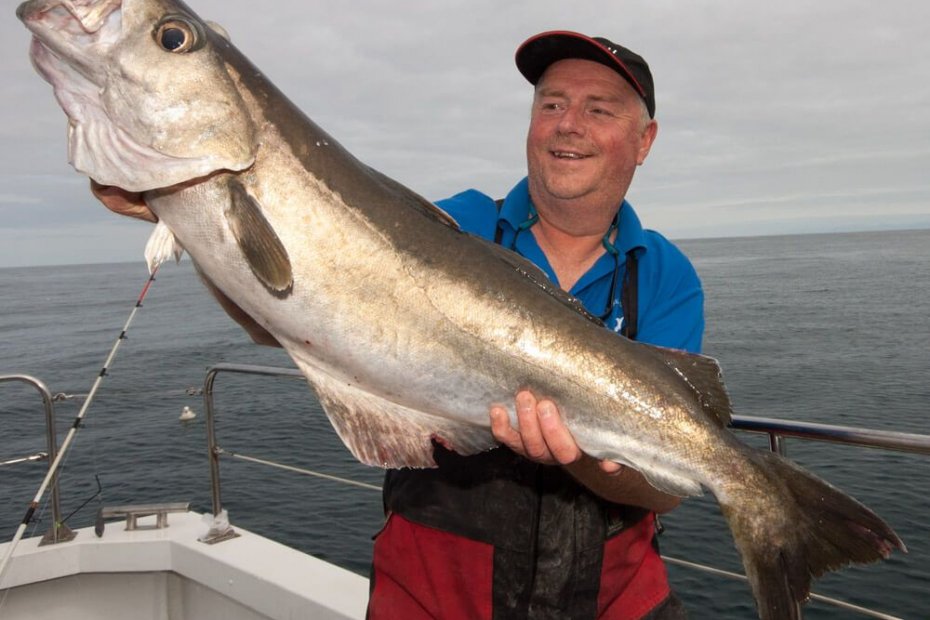 Mention wreck fishing in the UK and attention instantly turns to the south coast and the great sport to be found off ports as widespread as Dover and Plymouth. What has always surprised me though, is the lack of interest by anglers in the wreck fishing available off the west coast of Wales out in to the Irish Sea. It rarely if ever gets mentioned and seems to be an uncommon request by customers when local skippers are asked re their fishing options. Why?

The Irish Sea is littered with wrecks, mainly from World War 1. German submarines used to wait inside the Irish Sea and target the merchant ships and transport vessels running the Celtic Channel when trying to get in and out of Liverpool. Such was the way the subs attacked the shipping, that often there are two, three, four or five wrecks all in close proximity. There’s no shortage of wrecks!

Maybe it’s the depth of water often exceeding 300-feet that puts anglers off? It shouldn’t as the tides are not too fast on the neaps and middle sized tides, even on the spring tides if you know where to fish. What is more, the wrecks are stuffed full of fish, mainly pollack, but with some good coalies, ling and cod in season. Granted the bigger pollack over 18lbs seem less common on the Irish Sea wrecks, but having seen for myself pollack over 18lbs, plus proof of a 22lb fish caught but not registered as it would have been a new Welsh record, then the biggies are there. What is likely happening is that the wrecks see little angling or commercial effort, so getting through the average sized pollack to the leviathans is the problem.

Not needing to convince myself, as I’ve enjoyed many a wrecking trip between Wales and Ireland over the years, I joined up with some lads aboard the Judy B, based in Pwllheli in North Wales and skippered by Dave Carey, to record a typical day’s wreck fishing for the area. The plan was to head out to a clutch of wrecks some 15 or so miles west of the Lleyn Peninsula.

The weather was kind giving us a flat calm sea, light variable wind and a hazy in and out sun.

I was fishing deliberately light with a prototype 8ft 6in 12lb class rod, and an ABU Revo Toro 60 reel loaded with 20lb braid. I was playing with the size of lead weight trying to get as light as possible and settled on 5ozs, and had no problems finding bottom and fishing vertically, this in 300-feet of water, mind.

Dave put us on the wreck straight away, and on the first drift pollack in the 4 to 6lb range started to come aboard. On the second drift I was playing a pollack about 6lbs and glanced round the boat. There were five of us on board and four rods were bent in to fish and the fifth had a fish throw the hook.

With each subsequent run through over the wreck the result was the same. We made seven or eight drifts and I had at least one fish, sometimes two every drift. The other lads were much the same. This was while the tide was on the last of the ebb. Typically as the tide hung on slack, bites eased away.

The conversation on deck was would we hit any bigger fish and should we try a different wreck. Both Skipper Dave and I felt that the bigger fish were more likely to show on the new flood tide, so we elected to hang on and see what happened.

About a half hour in to the new flood, the bites suddenly increased. Two of the lads, Anders and Woody, both bagged fish in the 7 to 8lb range, then added fish that looked an easy 10lbs. Skipper Dave grabbed a rod and also got in on the action with a good double, followed by Pete Redman with another 10lber .

While all this was going on, I’d been doing fairly well with smaller 4-inch weighted shads fished on a Whitby rig. With the bigger fish more likely now, I’d upped the size of my lure to a 6-inch Devils Own weighted shad in a yellow semi clear colour. I also changed from a 25lb Fluorocarbon hook length to 20lbs and slowed my retrieve right down as I’d had a few fish just pluck the tail and leave it at that.

I had a couple of 7lb or so pollack on this yellow shad, then something hit the lure just as it was on the first few feet of the retrieve. I knew this was a cod. No diving and ripping line off like a pollack, just a solid head shake or two. It was not a huge fish, but was heavy enough and grudgingly came upwards a bit at a time. Still nodding and shaking its head I got it half way up…and the hook pulled. I get hacked off by things like this, just the same as everyone else, but experience tells me to check the lure and get back down there, soon as! A couple more 6lb pollack later and I dropped down right over the top of the wreck. Felt the lead hit hard, and began a methodical slow retrieve. Maybe 20-feet up I felt that slight increase in rod pressure as a pollack sucks the lure in. Yet it didn’t, it just hesitated. So, still retrieving, I speeded up the lure and watched the rod tip pull over as the fish gulped in the lure in fear it was getting away. The fish felt the hook, turned, and crash dived for the seabed singing line off the reel. This was a much better fish and keeping it away from the wreck on the light gear took patience and a soft touch.

The fish was now well above the wreck, but crash dived a couple of times more before sulking in mid water. It was a tug of war, steady pressure from me, the odd kick and short dive from the fish, but I was winning. The fish came steadily upwards and showed as a faint blodge of white deep down. I knew it was a good ‘un, but was not sure how good.

I asked for the net and Dave was ready and waiting. The fish broke surface. My first instinct was to check the hook hold, but the lure was well in and looked safe enough. I lifted the rod tip, slid the fish in to the net, and Dave scooped it up. I got the lads to weigh it and it went 14.5lbs. A thick set, heavy behind the head, pollack that was in its prime and a really nice fish for the Irish Sea. This proved the best fish on the day, though everyone had double figure pollack and a fair few of them. We tried another wreck towards the end, and again took similar sized fish to 10lbs off it.

What I tend to do on these wrecks is to fish a standard sized lure like a 4-inch shad, 6-inch Jellyworms, or similar sized artificial sandeel for the first few drops. This gets me a few fish to build my confidence, but more importantly allows me to gauge how the fish are feeding on the day, either confidently sucking the lures right in, or are finicky and just pulling the tails. I’m also sussing out how little lead I can get away and making sure my rig is compatible with what the fish want, i.e. a short or longer trace, or a lighter breaking strain to the lure.

I also try a few different coloured lures to sort out what the fish want best on the day. Some days the fish will hit what is put in front of them, but on others a slight shift in colour can make a world of difference and I have found that a clear yellow lure does work especially well on pollack in clear water.

Once I’ve got things worked out, then I swap to bigger lures. Firstly I want to target the bigger fish, but equally I don’t want to fish small lures all day and take silly amounts of smaller pollack. I’d rather catch fewer but better sized fish.

The wrecking in the summer months is excellent with the season starting in May and running through in to October. The fact is that the winter fishing may well be brilliant, but there’s been so little experimental fishing done at this time, no one really knows for sure! I’ve had a couple of days out there in winter and done very well, so my guess is its good!

So, you can see from the pics I’ve used to illustrate this feature, that Irish Sea wrecking is alive and well and just as good for numbers of pollack as our more southern UK wrecks are. Its virgin territory compared to most other wrecking areas and well worth a visit or two!