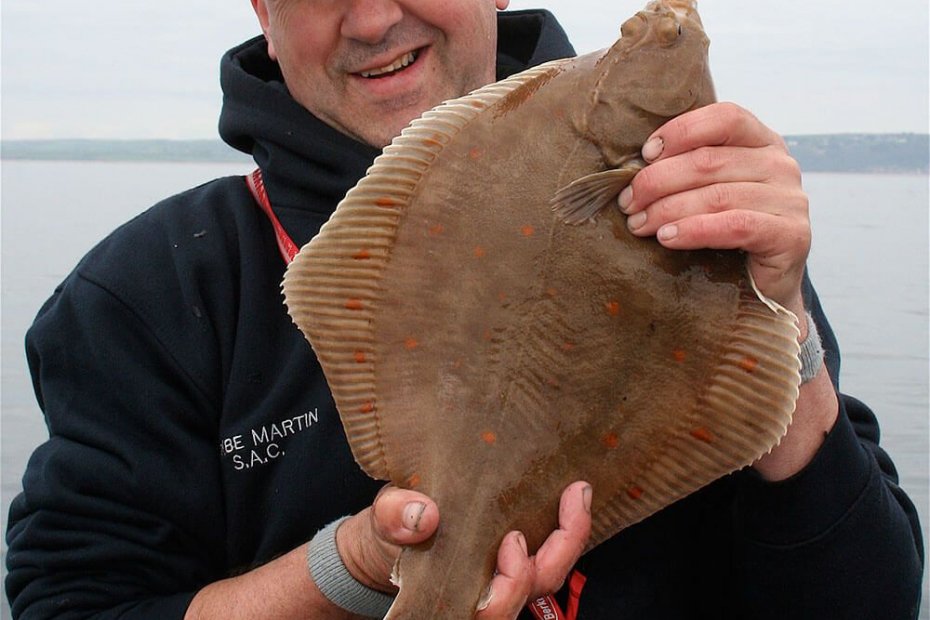 I have a fondness for Dartmouth in South Devon built upon many good memories collected over a number of years. Some of these are from romantic breaks with my wife and others from times spent on family holidays. In addition to this I have a wealth of angling memories especially in relation to trips out on the famous Skerries Banks fishing for plaice. So when my good friends Colin Joy, Ashley Clarke and Donald Kyte invited me along for a trip to revisit old haunts I did not hesitate to accept.

We had enjoyed several CMSAC club trips on the Skerries several years ago onboard Barry Lingham’s famous boat “ Jennifer Anne Of Dart”. Our first trip I remember well as we landed numerous plaice to almost 4lb.

We arrived at Dartmouth just before 7.00am an essential plan to arrive and get the boat launched and car parked before the tourist hordes stirred. There was barely a breath of wind and the estuary was a glossy smooth dimpled by the occasional small fish.

We chugged slowly out of the harbour taking in the splendid views of luxury properties and historical landmarks. Bayard’s Cove famous as the location for filming of popular seventies period drama “The Onedin Line. High upon the hill behind dominating the horizon was the Brittania Royal Naval College and at the mouth of the estuary Dartmouth Castle and a church whose grave yard was decorated with a splash of vivid yellow primroses.

Even the open sea was mirror calm as we throttled up on leaving the speed limit and bounced across the water towards our destination the Skerries Banks a mile or so off the South Devon Coastline of Slapton and Blackpool Sands.

Colin had stored the co ordinates of the banks on the GPS system but this was not really needed as a couple boats were already in place drifting the banks. Plaice fishing from the boat is delightfully relaxing and undemanding fishing.

TACKLE
I was fortunate to be using a Berkley Urban Spirit Spinning Rod that I had recently acquired and looked forward to christening it with a plump plaice or two. I matched the rod with a small Shimano Fixed spool loaded with 20lb braided line.

A 2oz lead was slid onto the line above two buffer beads. From this a swivel was clipped a four to five foot trace with a short dropper two feet from the end hook. Hooks were size 1 Sakuma 540 Manta’s. Incorporated into the trace was a generous spread of colourful beads. Plaice anglers and hopefully plaice have a great fondness for beads and many consider colour selection to be of great importance. I had received a tip that green and black was the colour to have, however having received this tip as I finished making up my last trace I had decided to stick with my selection of red, yellow, white and green.

Plaice love beads and other attractors!

BAIT
We had brought along 4lb of worm to share between the four of us, two pound of king rag and two pounds of lugworm. This had been ordered in advance from our local tackle shop “Summerland’s Tackle” Westward Ho! In addition we had a pound box of calamari squid that is cut into long thin strips to tip the worm baits. I remember Barry Lingham stressing to us years ago how important it is to cut the squid as thin as possible so that it wavers tantalising from the bulked worm bait.

TACTICS
The boat is taken to the uptide end of the bank. The baits are lowered to the bottom and the rod held at all times. It is possible to feel every ridge of sand as the weight trundles along the seabed. At this point I remember a discussion with Weymouth Skipper Colin Penny asking if the fish see weight or bait first when drifting. I tend to imagine the weight sending up little puffs of sand as it bounces the bottom disturbing the sand and perhaps attracts the inquisitive plaice? Or does the bait waver tantalisingly ahead of the weight in the tide?

The angler needs to feel carefully for when a bite comes it is essential to pay out several yards of slack line. No frantic striking just let the plaice devour the bait. When you judge that the plaice has had time, engage the reel watch the rod tip curve over and tighten. The plaice will start to kick on the end of the line. Let the rod absorb the lunges and slowly persuade the flatfish towards the surface enjoying the life that reverberates up through the line to be absorbed by the light rod. ON THE DRIFT
A seascape stretched far away beneath a grey sky that occasionally allowed through shafts of morning sunshine. Our baits bounced across the sandy ridges forty feet or so beneath the boat. The kettle was on hot tea would soon be ready and the scene was set. There is always a great feeling of anticipation early in a fishing day.

First rattle of rod tip is to my own rod and I pay out the obligatory few yards of line. On tightening I feel that there is life on the line. The fish is brought to the surface but instead of the expected plaice the sleek lines of lesser-spotted dogfish emerge through the clear water. Don brings the first Plaice to the boat…

Next rattle on the rod tip is to Don’s rod and this time it is a plaice that comes up through the clear waters. We celebrate with a hot cup of tea and tuck into sandwiches and croissants, funny how boat fishing gives anglers such an appetite.

The tidal pull is initially quite slow but as the ebb picks up our lines take on a deferred angle as the baits trundle across the sandy ridges beneath, Bites start to come fast and furious with numerous plaice devouring our worm and squid baits.

Ashley Clarke with a fine plaice…

The best of the plaice probably top 2lb 8oz and put a serious curve in our light rods. Gannets are seen at various times through the morning and fish break the surface all around the boat. These we presume are launce though there could of course be a few mackerel. All around small private boats and larger charter boats are working the banks. Clusters perhaps indicate hotspots or just the natural instinct of following the crowd. Each drift sees the boats taken to a point at the uptide end of the bank. The grey morning clouds have now burnt off and warm sunshine illuminates the sea, Is there a better place to be than bobbing about on a calm sea whilst searching for brightly decorated flatfish. No dramatic screaming reels in this game just quietly, relaxing and satisfying angling.  Strangely as the tide turns and the flood begins bites become few and far between. The previous year the flood had fished well and ebb poor so as always it is difficult to predict what will happen beneath the surface. Many factors affect the behaviour of our quarry the fun is in playing the game. By late afternoon we decide to head back to Dartmouth as sport had slowed and we have a long journey home. We have landed 22 plaice and have kept enough to take home about four each. These will make a delicious meal fried in butter with a dusting of pepper, a splash of lemon and a slice of fresh crusty bread.

With the boat on the trailer its time to grab a portion of fish n chips to sustain us on the road to home. The journey home is punctuated by a short break when the trailer tyre explodes. Fortunately right outside a garage where a helping hand from a breakdown service comes to our rescue.

– URBAN SPIRIT 802 15/40 M Spin – length 8′ rated 15 – 40g
The rod I used on the trip was as I stated earlier a Berkley Urban spirit spinning rod. The rod proved ideal for this light boat fishing with its sensitive tip showing the plaice bites extremely well. I felt that there was plenty of power there if it was needed but the rod still gave enjoyment in the playing of even moderate sized flatfish to the boat.

When I downloaded my pictures of the days fishing even my wife exclaimed that the rod looked really cool. And that’s a first! The rod really is pleasing to the eye with its trendy livery. The matt black finish through the main blank is perhaps an attempt to reduce rod flash that could alarm the quarry. Top quality fuji rings throughout on an IM 7 Carbon blank. The rod comes with a stylish neoprene rod bag and handy rod straps.

A few days later I took the rod to the coast and flicked a plug out for a bass. The rod performed well flicking the lure to a respectable distance using 20lb b.s braid and fixed spool reel. Every wriggle of the lure was transmitted well through to the rod tip. I look forward to hooking a bass on this delightful tool that will be visiting the coastline frequently this summer.