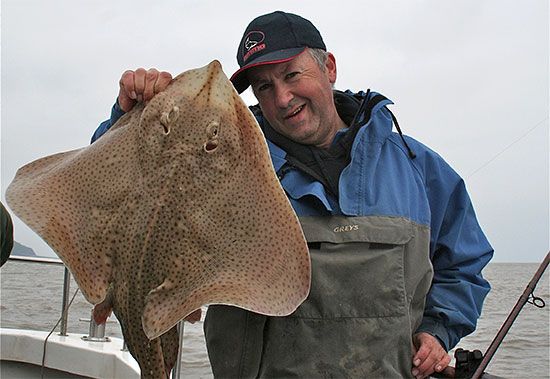 Minehead is a small seaside town on the West Somerset coast that has one of the countries longest running Butlin’s at its heart. There is an abundance of holiday accommodation within the area to suit all budgets and plenty of activities for families. It is also an ideal base for the sea angler with an abundance of prime shore marks on offer. In addition there is an active fleet of charter boats that can put anglers onto some of the countries best ray and winter cod fishing.

Each spring I organise a boat trip for members of the Combe Martin Sea Angling Club and after years of sterling service we had once again booked Steve Webber’s boat “Osprey”. One of the joys of boat fishing off Minehead is that the fishing grounds can be reached within minutes unlike many south coast marks where epic journeys of several hours may be needed to reach the most productive marks. This reduced Journey time also enables the skippers to offer a favourable deal for anglers as fuel costs are as a result reduced. Having said that, trips are often made to marks further away with forays made to the Welsh side and North Devon coast dependant upon season and species sought.

Late May and early June are prime months for targeting ray and smoothhound and it was these species we hoped to contact on our annual foray. The Sunday we had picked coincided with a medium sized rising tide of 9.9 metres. Many reading this will immediately register that that is a big rise and fall and you are correct as the Bristol Channel has some of the worlds strongest tides caused as millions of gallons of water ebb and flow between England and Wales. This rise and fall dictates the boat fishers day for the harbour is only accessible for a few hours each side of high water.

For this reason the skippers study the weather forecast carefully before setting sail, as there is no retreat from the sea once the tide has ebbed beyond the harbour wall. I recall sitting in a restaurant in Crete as the warm Mediterranean water lapped close to our seat. “ Not much rise and fall here”, I commented to the waitress. She replied “There is a much bigger rise and fall out on the open coast with up to a metre between high and low water.” My description of 10 metre tides was greeted with amazement.

A significant factor that impacts heavily upon the fishing is the colour of the water. The rivers Severn, Wye and Bristol Avon carry millions of tons of silt from Wales and Middle England this is kept in constant suspension throughout much of the year. This colour ensures that the resident fish are willing to feed throughout the daylight hours in relatively shallow water on even the brightest of days.

On this day our sailing time was at the civilised hour of 09:00 that enabled breakfast and a mug of hot coffee in the Harbour Café before sailing.

The party consisted of six club members all well versed in the art of boat fishing. The friendly banter commenced within minutes as the engines pushed the boat out onto the murky waters of the Channel. A cold North East Breeze and steely grey sky made me glad I had brought along plenty of warm clothes; you can always take off a layer if it gets hot. Nothing more miserable than getting cold whilst fishing except of course getting cold whilst not fishing!

After five minutes down went the anchor and it was soon time to cast out our offerings. Today’s menu consisted of frozen baits including Ammo dirty squid, large sand eel, Launce and squid cocktails, sand eel and squid cocktails and bluey’s. In addition some members had brought fresh peeler crab, frozen peeler crab and frozen spider crab. Scent is the key out in the turbid waters of the Bristol Channel. These baits were carefully presented on razor sharp hooks in sizes 4/0 to 6/0 my own brand choice being Sakuma a quality product that I have every confidence in. Throughout the day amidst the banter there was talk of rigs, tackle and the merits of various technicalities. I had elected to use a single 6/0 long shank Sakuma Manta attached to a three-foot trace of 100lb mono. This I had attached to a heavy-duty three-way swivel to the bottom of which was clipped a 6oz grip weight. A shock leader of 80lb Sakuma leader completed the set up that was cast out using an ABU Suveran Evo 992 Uptide Rod. My Diawa Sea Line HV 40 was loaded with 20lb Berkley Trilene Big Game.

First bone of contention was single hook or Pennel rig. I had elected to use a single hook to enable easier unhooking of fish that were all due to be returned unharmed. This was challenged by the statement that most fish hooked on a two-hook rig are hooked by the top hook or bait holder. I replied that this is inevitable as this is the hook that makes contact first. Having stated my preference for a single hook on this occasion for my shore fishing I use a pennel rig for 90% of my fishing as it holds the bait better when casting.

The most commonly used boat rig is the free running ledger set up but on this day I had elected to use a fixed lead set up as with this style of fishing the vast majority of fish will hook themselves. The pressure of tide on the line eradicates much of the perceived sensitivity from using a running rig and a fixed set up is less prone to tangling.

As to hook lengths I seldom drop below 100lb for general boat fishing using bottom baits. I see many anglers using 30 to 40lb hook lengths and have seen many good fish lost as a result. Ray, smoothhound, cod and even bass can chaff line so why risk losing the fish of a lifetime? The heavy hook length will not deter fish especially in the murky depths of the Bristol Channel. The thicker line is also far less prone to tangling ensuring good bait presentation on every cast. This thornback put a smile on Simon Silvesters face!

So having got the technicalities out of the way lets get back to the trip in question. There is always a sense of anticipation early in the day with hope of rod bending specimens spurred on by memories of past adventures. So with baits in the water and kettle on it was time to await events.

Matt Jeffrey’s rod tip was the first to indicate a bite and his rod was soon bending to the pull of a decent sized fish. We all peered into murky depths for a glimpse of the day’s first fish. A great start to the day was signalled when a handsome blonde ray of 14lb 8oz slid into the waiting net. Matt was delighted as it was his first blonde and decent one at that. Next fish up was a small spotted ray of a couple of pounds to the rod of Chris White. This drew an envious glance from fellow club member John Shapland who was hoping to add to his tally of species for the year. His ambitious target is to hit fifty species for the year a target he narrowly missed by just a couple the previous years. Fishing is very much a personal thing and setting targets can be great motivation for an angler. Setting out to catch a wide variety of species can only help to improve all-round angling ability with a wide range of rigs and tactics required.

A nod of my own rod tip resulted in pleasing tussle with a vividly marked thornback ray. John Shapland then followed with a small-eyed ray topping 9lb. This was an excellent start to the day, four species of ray within the first brew of the day and not a doggie in sight. Of course this was not to last as the dogfish soon homed into our scent trail and began to punctuate the worthwhile fish.

As the tide pull began to ease the first smoothhound of the day tore into the baits giving spirited accounts before being safely encompassed within Steve’s waiting net.

After half an hour of brisk sport the bites started to ease off and Steve declared it was time to up anchor and head out onto the banks further offshore where there would be more tide. Relocating throughout the day is key to making the best of time available. Tidal state, current and location are factors that are only learnt after years of experience and it is this in part that we pay skippers good money for.

Further offshore anchor down and baits down it was time for a cuppa. A succession of ray and several more smoothhounds followed but sport failed to match that of the morning session. As is so often the case in my experience it is seldom that both ebb and flood fish equally. Indeed every tide is different.

It was a contented party of anglers who climbed the harbour steps reflecting upon a good days sport shared with good company that had flashed by all too quickly as most fishing trips do.