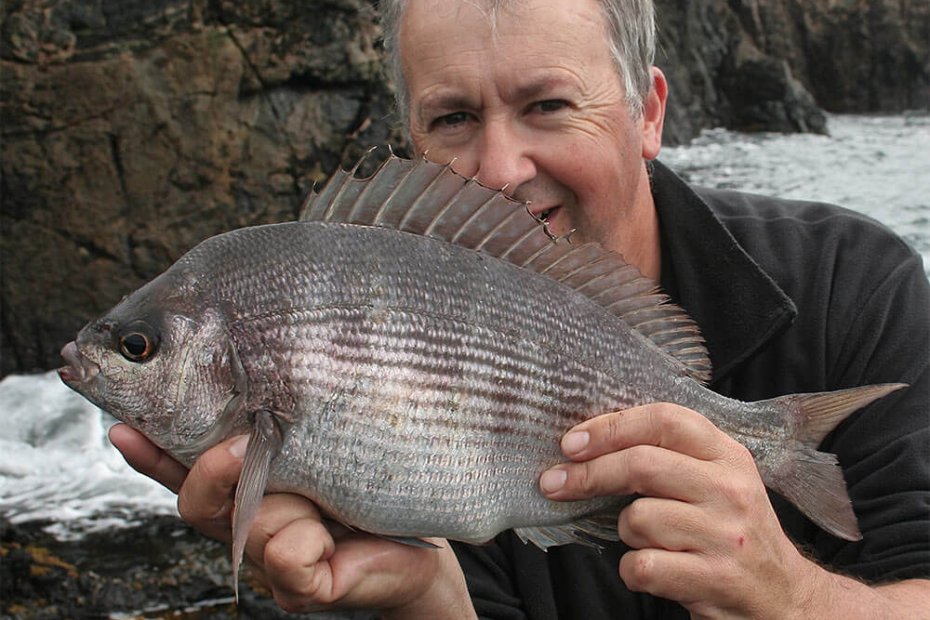 We climbed the familiar steps that were leading to yet another angling adventure on the unique Island of Sark. Memories of past forays immediately flooded back and anticipation of the week ahead grew. A convoy of tractors and drivers were waiting on the quayside and the routine of off loading our gear onto the relevant tractor was reassuringly normal to me and my two long term mates John Avery and Nick Phillips both veterans of previous Sark angling excursions. On this occasion however we had a newcomer joining us my 18 year old son James who had agreed to accompany us for a bit of fishing and the promise of a few pints in the pub each evening. With luggage safely on route to our accommodation we chose to saunter up the Harbour hill savouring the warm autumn air and scents of vegetation that lingered in the atmosphere. First port of call was the bike hire store to hire our transport for the coming week. Then a visit to the Island stores to purchase a few loaves of fresh white sliced and a couple of chocolate bars. A cup of tea at our accommodation, unpack the gear and then out fishing. The passenger ferry from St Peters Port to Sark

Several years ago when we had first travelled to the island we had come via the ferry from Weymouth carrying a vast amount of bait and tackle. We would fish each day for mullet using light tackle and then at night we would fish from the harbour wall for the huge conger that were reputed to live beneath the structure. After a couple of trips we tired of this marathon approach. Fishing 10 hours for mullet, with a short break for tea before descending back down the harbour hill until midnight in search of conger was exhausting stuff. Far better to fish all day for the grey mullet and bream then chill out in the evening with a meal and a few pints whilst discussing prospects for the following day and of course putting the world we had left behind to rights.

Autumn is undoubtedly the best time for angling in Sark with grey mullet and black bream our prime targets. We had chosen to visit in mid September and had chosen dates that coincided with building spring tides.  We hoped that by coming earlier than on previous excursions we would enjoy favourable weather conditions. It is probable that late October through until December offer the best chance of one of the outsize mullet that frequent the Island. We had on this occasion put enjoyment before potential size and hoped for good numbers of fish that always provide exciting sport on the light tackle we employ. Sark is as I said at the beginning a unique place to visit and as has often been said there is far more to fishing than just catching fish. Being in beautiful wild surroundings is surely all part of the experience. Sark has a population of around 600 people; transport is by pushbike, tractor, horse and cart or foot. There are no cars, no street lights (well only one outside The Mermaid Tavern). The sky boasts no light pollution and as a result offers a star-studded vista as you walk the quiet lanes at night. The people of Sark are generally friendly and welcoming. A network of rough tracks links clusters of houses and farmsteads. Tree-lined – leafy lanes lead to secluded bays; cliff paths wind their way down to steep cliffs and lichen encrusted rocks. The coves, headlands and bays tend to have alluring French sounding names such as Havre Gosslin , Rouge Terrier , Le Platon, Le Boutique Caves and Dixcart bay. The waters that surround the Island are for most of the year crystal clear allowing the angler to glimpse many of the fish he seeks. Large shoals of grey mullet often bask upon the surface giving a tantalising glimpse of what might be hooked. Rocky gullies filled with boulders and kelp provides the perfect habitat for wrasse and pollock.

We had learnt on previous occasions that it is best to travel light and be prepared to move from mark to mark if fish did not show. James and I both carried JW Young Barbel Travel rods that were paired with Shimano fixed spools loaded with 8lb line. The end tackle consisted of Dave Harrell Barbel Missiles supporting weights of 5 to 8 grams. A hook length of 8lb fluorocarbon connected to a size 8 Drennan Specimen or Sakamu bream/mullet hook completed the outfits required. The bait for bream and mullet was breadflake carefully pinched onto the eye of the hook leaving the hook point fully exposed.

Choice of mark is determined by several factors with wind direction a major influence on most days. Fortunately being a small island with steep sides there is always somewhere sheltered to fish.  Tidal state is next on the list with some marks fishing well over high water, others  over low, some fishing better on the flood and others on the ebb. This knowledge is gathered over a period of time but as a rule fish tend to frequent areas of weed and tide over low water moving into bays and around headlands over high water.

Great care needs to be taken when descending to many of the marks on the Island with rock strata varying. If rain falls some marks can be particularly hazardous and should be avoided at all costs. Black algae and yellow lichen are both tell tale signs of potentially slippery areas. Quality walking boots are essential as is warm waterproof clothing just in case the weather turns foul. The impressive landscape of Sark

The general approach to the fishing is to introduce a few handfuls of ground or mashed up bread on arrival. The tackle is assembled and the bait set to fish at around 8 to 10 ft. The bait is then cast out with eyes focusing upon the crimson topped floats that bob optimistically in the swell. Bites vary with the float sometimes sinking just beneath the surface and at other times plunging rapidly out of sight. The connection rate varies from day to day with some sessions seeing close to 100% hook up rate and other less than 10%. Applying line floatant between rod tip and float can help as can altering the shotting pattern or depth at which the bait is fished.

Concentration is vital as the disappearance of the float could result in the fish of a lifetime. A good quality pair of sunglasses’ and a peaked cap helps considerably in reducing glare and eyestrain. Always carry a packet of paracetamol just in case a headache intrudes and drink plenty of fluids. (Not alcohol as you need to be fully focused at all times). James was new to this style of fishing and was surprised when he hooked his first mullet a fish that gave an exciting encounter on the light tackle we were employing. James best mullet of the trip came on our last day and at 3lb 8oz was a personal best that took several minutes to subdue as it surged to and fro clearly visible in the clear water. Largest mullet of the week was secured by Nick Phillips and pulled the scales to a creditable 5lb 6oz. John Avery landed numerous quality mullet to 4lb 15oz and hooked an absolute monster that gave a tantalising glimpse of a huge flank and tail as it rolled on the surface before shedding the hook. Best black bream of the week weighed 3lb 1oz and fell to myself. All of these fish gave awesome scraps on the tackle that we used. Grey mullet make long searing runs utilising the tide to test tackle and hook holds to the limit over a period of several minutes. The black bream tend to dive straight for the bottom and dense weed in which they seek sanctuary. Despite the rough ground and powerful fish most contests go the anglers’ way provided patience and knowledge of tackle strength is employed. In addition to the mullet tackle I had packed a travel spinning rod and reel loaded with 20lb braid. A week before departing I had ordered a Snowbee Slingbag. This useful bag was crammed with soft plastic lures to try on the wrasse population. Each day I had a few casts with the lures and hooked several small wrasse up to 2lb. Several lures were chomped clean in half as the rocky gullies were explored. I was surprised not to hook into any big fish as I have seen wrasse in excess of 5lb whilst mullet fishing. A concerted effort with soft plastics would undoubtedly bring excellent results. Sadly there is only so much time to experiment and those outsize mullet and bream kept pulling me back.

During our six day stay we fished close to a dozen marks throughout various areas of the Island each one offering great potential and spectacular views. On clear days it is possible to view the French coast and the nearby Islands of Jersey, Guernsey and Herm.

We stayed at Le Vieux Clos a small guesthouse with friendly hosts Peter and Sally Hutchings who made us very welcome throughout our stay. Contact details – vieuxclos@cwgsy.net

To conclude the four of us enjoyed a rewarding weeks fishing on a uniquely tranquil Island. I am sure the experience has sparked a greater interest in angling for my son James and has brought father and son closer in an environment away from many pressures of the modern world.

Getting to Sark: – We flew to Guernsey from Exeter Airport and then caught the passenger ferry from St Peter Port to Sark.