Whiting have a wide ranging habitat being found as far south as the northern shoreline of The Mediterranean and even in to the Black Sea, but also northward to the border between Norway and Russia, and westwards to Iceland. They are found throughout the UK and Ireland, being one of our commonest species.

When whiting are living over sand their colouration tends to be a sandy brown back with butter coloured flanks in to a silvery white belly. Over shingle, broken shell and when living in amongst mixed broken ground the back takes on a more dark green/grey colouring. Also look for the dark spot on the whiting’s upper front edge of the pectoral fin. Their diet consists of mainly sandeels, shrimps, sprats, plus worms, small crustaceans, plus shellfish washed out and broken up by the tide.

The breeding season is from January through to late April, but this can extend in to July when resident in more northern seas. A trait of juvenile whiting under 1.25-inches is to shelter for protection in amongst the tentacles of floating jellyfish.

When it comes to depth the whiting is versatile being happy in very shallow water just a few feet deep when working surf beaches, but can be found as deep as 300-feet or more.

WHEN AND WHERE TO FISH
It’s said that whiting show with the first autumnal frosts, but this is an old wife’s tale. Small pin whiting, that is fish up to about 6-inches, can be caught from many areas throughout the year, and in the Northeast of England and in Scottish waters even adult whiting can show off the shore pretty much all year round.

In the southern half of the UK and around Ireland, generally speaking, the main whiting shoals move inshore around late August, with September the real start to the season. The fish build in numbers through October, November is the peak month, but by mid December in many areas they are already thinning out and moving back offshore. This especially applies to surf beach fish.

Ideal weather for whiting is a calm, cold starry night with minimum surf. Whiting do not like rough sea conditions when in shallow water and will move out offshore at such times. Bigger whiting over a pound can move in to the surf beaches post Christmas and these will work a light to moderate surf and can be caught very close in.

The specimen sized whiting tend to show from the deeper venues such as Dungeness, Chesil Beach and from man made structure casting in to deeper water, but some of the best catches for sheer numbers can come from the shallower west and eastern facing surf beaches.

From deep water venues the size of the tide is relatively unimportant as the fish will be there in numbers on all tide sizes. On shallow surf beaches though, the best of the fishing will be during the bigger spring tides, especially from low water and right through the flooding tide to high water. On flood tides the whiting shoals tend to be close in, often within 70-yards of the tide line. As soon as the tide starts to ebb though, the fish will move out wary of being caught by the receding tide. At this time casts well in excess of 100-yards may be needed to maintain contact with the fish.

Fishing through the dark hours is also the most effective. In very deep water daylight will produce fish, but otherwise dusk and its reducing light levels triggers the whiting’s inshore migration, especially if low tide occurs in the dark.

On shallow surf beaches look for deeper gutters and holes as the fish use these to work along the beach. These depressions will hold any food washed down or inwards by the tide and are the most consistent spots to fish.

SHORE WHITING TACKLE
On deeper venues and when fishing a light surf, a 3-4oz bass rod and smaller 5500 sized multiplier or 5000 fixed fixed spool loaded with 12lb line and a 40lb shock leader will be fine and give good sport.

Generally though, most anglers will need to fish standard 4-6oz beachcasters and a multiplier reel such as the ABU6500i TSR, or Penn 515 loaded with 15lb mono and a 60lb shock leader for longer range casting when necessary. The Penn Surfmaster 750 or Shimano Navi 7000 are popular fixed spool reels as an alternative.

HOW TO BUILD A 3 HOOK WHITING FLAPPER RIG

WHITING BAITS
Lug and rag are good all round whiting baits, but tend to pick up the smaller fish. If you tip off with a thin strip of mackerel just a half inch long, this will help pick out the bigger fish in the shoal. Tipping with squid, bluey and sandeel has the same effect.

For bigger whiting, use fish baits! Strips of Bluey, mackerel and herring work especially well. Cut the strips about 2-inches long and just a half inch wide leaving plenty of flesh on the skin to maximise the scent. For longer range casting bind the bait to the hook with bait elastic. Don’t ignore shellfish either. A 2-inch section of razorfish, a mussel, cockles, sand clam and especially queen cockle will all take whiting in the autumnal period, especially after a blow when the sea has calmed down.

TOP TIP 1
At low and high water slack, if you just fish hook lengths shorter than 10-inches, you’ll often get bites but resulting in fewer hooked fish. Change to a longer 15-inch hook lengths. This gives the whiting the room to take the bait, turn back with the tide and build up a little speed that sets the hook for you.

TOP TIP 2
Stick to grip leads when whiting fishing. Whiting run in shoals and will follow the scent from a static bait and compete against each other to eat the baits. This can often result in two or three fish hooked at once as a shoal comes through.

TOP TIP 3
When fishing in to deeper water and using a 3-hook flapper rig, do not fish the line tight to the rod tip. This can see the top and middle hook lengths to far up off the seabed to be fully effective. Deliberately release enough slack line in the tide to create a slight downward bow to keep all the baits tight to the seabed. Watch the bow in the line for lift bites, though a decent whiting will usually still rattle the rod tip when doing this.

TOP TIP 4
Sharp hooks are vitally important when targeting whiting, which though voracious feeders often lack the weight and swimming power to easily set a hook on their own. Ultra sharp patterns such as the Kamasan B940 and Sakuma Stinger are the best options. Use 2’s for average whiting, but go up to a 1/0 for specimen sized fish when using bigger baits. TOP TIP 5
For the biggest Christmas/early New year whiting that run the surf line or come from deep water marks, the best bait by far is either a half or whole sandeel about 4-inches long, or a roughly made sandeel/mackerel combo with lots of juice coming out. These fish work the surf looking primarily for sandeel, hence its effectiveness at catching the bigger predatory whiting. 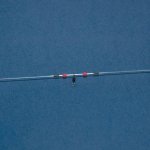 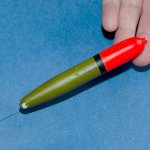