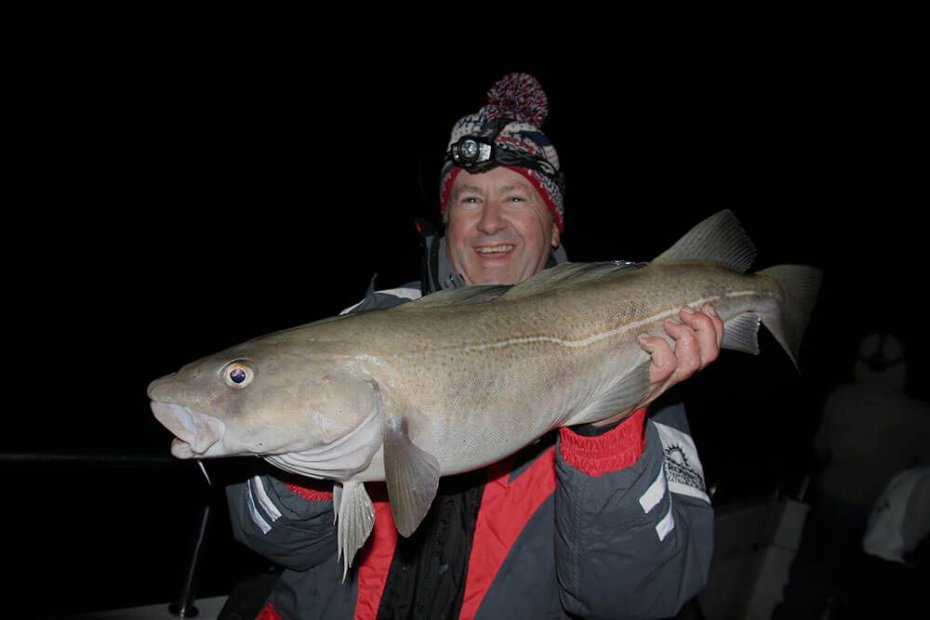 Wayne Thomas heads to the port of Minehead jumping aboard Osprey for some winter Bristol Channel cod fishing which yields not only cod but rays and conger too.

Weather tends to make or break fishing trips particularly when it comes to boat fishing. On this occasion luck was on our side and the dawn broke with a crisp layer of frost glistening in the morning sun as I loaded the car with the rods, reels, gear and bait required for a day afloat.

We were heading for Minehead on the Somerset coast a coastal port that supports a small fleet of charter boats that take anglers out onto the murky waters of the Bristol Channel. Cod were our target with a good chance of a bonus blonde or thornback ray.

It was a late start today with us joining the boat at 11:30am as the tide ebbed. Minehead harbour is only accessible two and a half hours each side of high water so once committed your out there for the day a fact that makes a careful study of the weather forecast and tide table essential.

A mirror calm harbour bathed in winter sunshine greeted us as we parked up on the quayside eagerly anticipating our day afloat. The Harbour tackle shop run by keen local angler Craig Butler was as always a hive of activity as anglers swapped fishy tales over a hot coffee. I picked up a couple of wraps of black lug to add to my freezer bag full of bait before hobbling along the quay with the days supply of gear. A few minutes later we are on board Steve Webbers “Osprey” steaming down channel to fish the familiar grounds less than a mile from the towering cliffs of Exmoor’s North Eastern flank. The water here is generally thick and murky especially during the winter months when fierce tides and the silt from numerous large rivers combine to create turbid water resembling oxtail soup. The water here is not deep at around thirty foot at low water. For this reason up tiding tends to be the favoured method.

Steve lowers the anchor and gives the call get the baits in the water. There are five of us on board today so there is plenty of room allowing most on board to employ a down-tide rod in addition to the up-tide set up.

TACKLE NOTES
Terminal tackle is best kept simple to reduce tangles I tend to use fixed set up with the lead on a Clements boom trapped between two beads and swivels. The hook length is a minimum 100lb b.s mono, no point in finesse in this murky water where fish will not be deterred by the line. If spurdog are likely then add a length of wire to combat their razor sharp teeth.

Baits need to be big oozing plenty of scent, squid, mackerel, blueys, herring, cuttle fish, launce, black lug, peeler crab and spider crab are amongst the baits on todays menu. These are lashed to large hooks using generous helpings of bait elastic.
I have elected to use 7/0 Sakuma Manta extras combined with a 6/0 Sakuma Manta pennel. The use of a pennel rig ensures good bait presentation with plenty of hook point showing despite the generous helping of bait.

There is a light North Westerly breeze blowing up channel and I am glad that I have donned plenty of warm clothing as the sun is occasionally hidden beneath the clouds straddling the cliff tops. To the West hovering in the sky are a multitude of Para gliders riding high on the thermals like mighty prehistoric birds. Osprey a 33’ catamaran sits comfortably upon the cold waters. Lines disappear from our rod tips into the mysterious depths below. Who will catch first? What will take the bait?

Jason Barrow is first into action his rod bending as he persuades a living resistance towards the surface. Disappointment as the rod tip springs back as the fish nears the surface. The hook less trace tells the tale, a spurdog. These toothy critters make light work of mono and only wire can be guaranteed to resist. Fresh bait goes down and it’s not long before Jason is in again, bringing the first of several spurdog to the stern of the boat.

Steve’s son Michael is a deck hand today and wields the capacious landing net with confidence safely netting each fish. Hot tea’s and coffees are passed around on a regular basis ensuring we are kept warm inside despite the chilling air that is to be expected in mid winter.

I lose a spurdog before changing to a wire trace and landing a fish of perhaps 8lb. As the tide begins to ease something better finds my bluey and squid hook bait. As I make contact the rod hoops over and a powerful fish holds in the tide. The rod absorbs powerful lunges and line is gained only gradually. We peer into the water eager to glimpse the culprit. I walk to the stern; young Michael follows with the net, twenty yards astern up pops a ray skimming the water surface before diving once again. It proves to be a pleasing blonde ray of just over 13lb. A short time later I am in action again and this time it’s a plump cod of just over 8lb again tempted by the squid and bluey combo. A few thornbacks also succumb to members of the party. Dan Spearman lands the second blonde of the day displaying it to the camera with a broad smile. Always good to see a smile when taking pictures instead of the serious specimen angler pose adopted by many. Dan Spearman delighted with his blonderay

As the tide turns and begins to flood the light is also fading. The sizzling of bacon and sausage is a welcome sound along with the tasty aroma. As the fish activity starts to ease its decision time. Stay here or move up channel for the last couple of hours?

We wait half an hour munching hot bacon baps and hot dogs whilst we ponder on the wisdom of a move. Steve suggests that there is probably a better chance of a big cod further up channel. Bites have eased so its soon a unanimous decision; up anchor and up channel.

TIME FOR A MOVE

It’s a little surreal steaming along in the dark, the water behind appearing to ride high in the boats wake. After twenty minutes steaming the anchor goes down somewhere off Dunster.

Out go the baits into surprisingly shallow water. All is quiet for a while and we savour the darkness of the night. The lights of Minehead decorate the shoreline to the South whilst the towns and cities of South Wales illuminate the Northern horizon. Conversations ebb and flow as they have throughout the day covering a multitude of topics; some frivolous some a little heavy.

After twenty minutes of inaction everyone seems to think alike and re-bait. Whether it is coincidence that sport suddenly improves; boost in scent or change of tidal flow one can only speculate.

A sudden slackening of line on my up-tide rod indicates that something has taken the bait. The rod doubles over and line is both won and lost in the following five minutes. A big cod is the hope but the angle of the line and headshaking fight gives a clue other wise. The glimpse of a large head in the boats lights adds to the excitement. Heavy pressure eventually brings a hard fighting conger to the boat at around 15lb its no monster but gives a pleasing tussle in the tide.

A few minutes later I am answering natures call when I hear a shout from the deck, “your rod!!!”. I hurriedly grab the down tide rod and set the hook. A pleasing resistance is felt as whatever has the bait lunges to and fro. This time the line cuts deep into the dark water. The pleasing sight of a double figure cod sliding over the net brings a chorus of “nice one”. I hold the fish aloft as our deckhand Michael happily wields my camera advising various angles to hold the fish for best effect. Getting good photos is vital in recording a day afloat providing a lasting memento to look back on in the future. Always give a little thought to framing the angler for best effect. Ensure that the frame is filled and that the fish is in focus. These days’ pictures also provide an interesting way of sharing fishing outings with friends and fellow club members via social media such as Facebook or WSF.

A codling is tempted by John Shapland’s bait and a few small conger, thornback along with the inevitable dogfish follow. As sport once again slows Dan Spearman kindly offers to fillet my cod. Always keen to avoid this messy job I accept his offer and watch carefully as Dan skilfully works the sharp blade along the fish’s flanks expertly separating flesh from bone to produce prime fillets of whiteflesh. The key to successfully preparing fish is undoubtedly a sharp knife with a slender blade.

After over eight hours afloat we head for home. Its been a good days fishing and for once its not at the best time that I have come to expect. For my experience over many years fishing would indicate that the best fishing time is last week or next week. 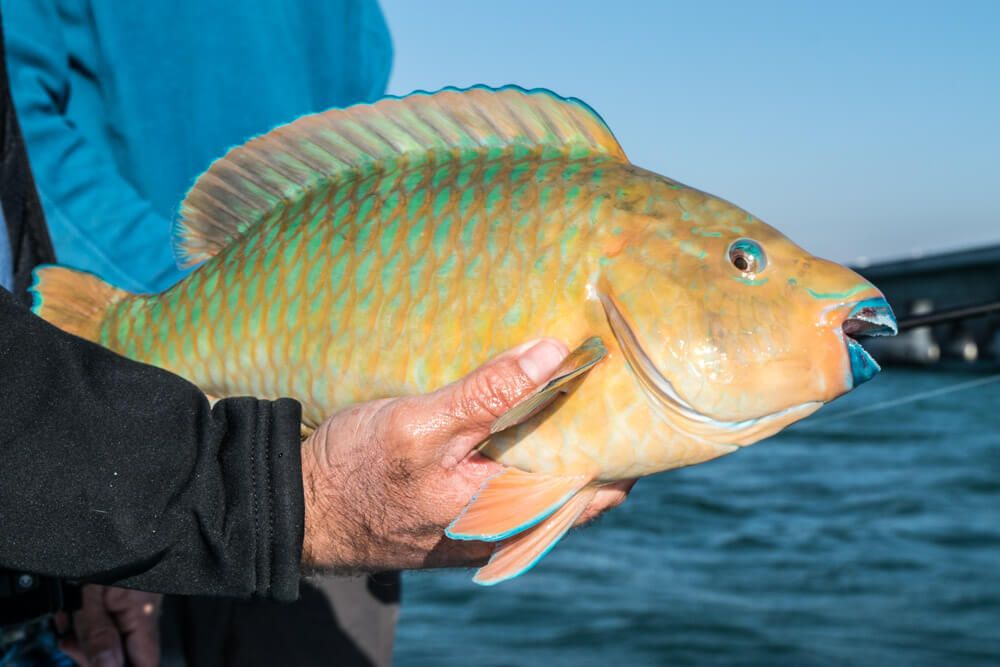 Mike Thrussell Jnr recently headed out to Florida to check out some gadgety goodness from top boating electronics brands Lowrance and Simrad, in amongst all this tech he also managed to find time to do a bit of fishing, taking part in a friendly species hunting competition.