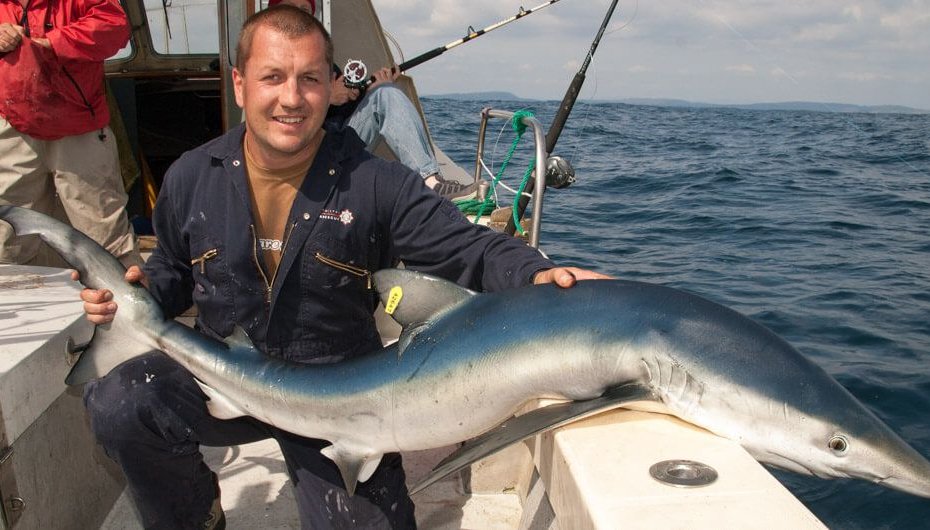 I’d never actually fished from Baltimore in west Cork previously, but accompanied by Mike Hennessey, Angling Information Officer of the Southwest River Basin District, part of Inland Fisheries Ireland, I was scheduled for a day out with skipper Nick Dent aboard his Offshore 105 Rooster.

Nick first fished in Baltimore in 1971 as a visiting angler, fell in love with the area, then moved lock, stock and barrel to the port in 1979 to become a full time charter skipper. It’s a move that really paid off as he’s become one of Ireland’s top skippers.

The scope of the fishing in these Gulf Stream fed waters is incredible. You can fish for gurnards, turbot, megrim, plaice and rays over clean ground, cod, haddock, pollack and wrasse over mixed and rough ground, wreck fish for big cod, pollack, ling, coalfish and conger on the wrecks, plus battle it out with blue, porbeagle and even six-gilled sharks, if you’ve a mind, out in the deeps. Few seem to realise that Baltimore is also a top venue for common skate with fish to over 200lbs accounted for. There are also albacore and bluefin tuna! Mike and I would be jumping aboard with a crew looking to target blue sharks. We’d no intention of muscling in on the crew’s shark trip, so elected to watch the action as it unfolded, but we would sneak in a little fishing for the prolific garfish that always come in to feed amongst the rubby dubby slick.

There were plenty of mackerel to be caught for bait, and just 20 minutes fishing was enough to amass enough for the days bait, and some fresh stuff for the chum buckets too. The sharks work close here and we were steaming for only a half hour or so before the engine noise abruptly slowed and stopped, and the chum bags went out.

Out went the balloons set at different depths with fresh mackerel flappers on for bait. Others chose to fish the bottom with baited feathers and started bringing up big whiting, codling to 3lbs, gurnards and poor cod, cuckoo wrasse, small ling and pollack.

Mike and I set up small bubble floats, tied on a small swivel, then attached 6-feet of 15lb Fluorocarbon and finished with a size 6 carp hook. Our bait would be thin inch or so long slivers of mackerel cut from the belly trotted back towards the shark balloons.

Being as the sharks, so far, hadn’t yet found the slick, we trotted the gar baits back watching the float which tends to indicate a bite by sliding forwards or sideways, but also watching for the flash of a gars flanks as they dart in to take the baits.

Instantly we were both in to garfish. Spirited fish leaping from the surface like miniature marlin and tail walking across the surface. To keep them out of the shark lines it was necessary to drop the rod tip low and fight the gars hard bullying them through the lines to open water near the boat. These were good fish to about 1lb 8ozs, then as suddenly as they’d come on, they stopped.

Mike H and I looked at each other knowingly and kept the rods out the water. This was a sign a shark was on the prowl and suddenly one came in across the stern deep down and showed colour briefly, but missed all the baits.

Ten minutes later a balloon disappeared, a reel screamed and the first blue was on. This proved to be a fish about 40lbs and fought really well. Tagged and photographed it went back to the deeps like a shot giving Nick a soaking as it went. It was back to the gars which suddenly seemed present in huge numbers. Steadily we got bigger and bigger fish by experimenting with the depth at which we fished the baits. The smaller fish were up on top and the bigger fish deeper down about 10-feet, so we adjusted our hook lengths accordingly. I nipped on a small split shot about 2-feet up from the bait, just to make sure it got down to the right depth quickly and avoided the smaller fish.

I watched the float slide sideways and hit a fish that pulled deep, then went light as it came up and leapt 3-feet clear of the water. I dropped the rod tip and it went deep again slugging it out, running sideways and hammering the light rod tip over. This fish went 1lb 12oz, followed quickly by another. It was a fish every trot back now for both Mike H and I. We were fishing hard realising we had a great chance of getting an Irish specimen.

It was gar after gar, but then I hit one that looked over 2lbs, but aboard, as best I could determine with the pitch of the boat, it looked just shy of 2lbs and went back to grow bigger.

Mike’s turn now and he dragged a big gar kicking and screaming from out underneath the inside balloon and lifted it board after a few leaps for freedom. This was huge and proved to be the specimen we were after at a cracking 2lbs 4ozs. I hit another that weighed 1lb 14ozs, then it went dead again. Time to reel in!

The wind had increased during the day quickening the drift and putting a lump up on the sea. Some movement in the balloons gets the baits moving deeper down and this very often will trick an otherwise reluctant shark to take the bait.

Nick had kept a steady flow of chum going all day and just when we thought that no more sharks would show, a reel chattered and another blue was hooked. This slugged it out deeper than the first and sat under the boat a few times, then making short runs. This was a feisty fish and caused some problems at the side of the boat thrashing its tail and getting angry. Lifted aboard for tagging and measuring prior to release it turned out to be a 60lber and a nice fish to end with! SOME FACTS AND FIGURES
Nick was telling me that aboard his boats over the years he’s seen over 40 species caught from these waters. That’s pretty impressive, and include stone bass, greater forkbeard, blue whiting, long-nosed skate and albacore. It’s a species hunters dream!

All months of the year will produce fish in these waters, but the fishing season traditionally runs from May onwards right through to early November. The sharks appear early here, often in mid June, and linger well in to late October if the season is mild. The bigger fish tend to show in September and October too.

The offshore ground is literally littered with huge numbers of wrecks, most from WW1 and WW2 courtesy of U-Boat actions. These carry huge numbers of big coalies, pollack, cod and ling that take lures and baits.

Nick carries good quality tackle aboard, but if you take your own gear and have experience, then a 12/15lb class rod and reel with 15/20lb braid line gives good fun on the bottom for average species, and when fishing lures over the wrecks. For deep water and when heavier leads are required, a 20/30lb class combo with 30lb braid is the better option. For the sharks, if there are only a couple of you fishing, then a true 30lb outfit using mono line is more than enough. If you fancy hooking a common skate, a 50lb class rod would be the logical option with 50lb mono. I’d also take a light float or spinning rod which with a small fixed spool reel loaded with 8lb line can be great fun when after the garfish.

The water here is generally deep, often 200-feet or more, so you will need leads from 6ozs up to a pound or more at times, but fishing braid helps reduce the lead needed to stay in contact with the seabed.

I’m hoping to get out with Nick again, hopefully in the not too distant future and take a proper look at the general fishing here after hearing so much about it. I really enjoy general ground fishing for species, and this area out from Baltimore excels for this.

TRAVEL
Most anglers choose to travel by ferry via Fishguard to Rosslare, it’s then an easy 4-hour drive or so to Baltimore. For more information contact Stena Line tel: 08705 707070 or access www.stenaline.co.uk.