Sorry it has taken a while to post this, but here goes.....
A couple of mates David from Surrey and Lance, who lives a couple of miles away from me in Tonbridge met up at Brighton Marina last wednesday for what was planned to be a trip after unicorns, sorry Cod, and maybe a go for plaice too, at 8am.
By 9am we were on our first mark a couple of miles off Seaford Head on an old favourite of mine which has thrown up some lunkers in the past....the distant past
We got the anchor down and settled down on the flooding tide for 2-3 hours with a mixture of small to large lug and cuttle baits. Unfortunately we were anchored over Battersea Dogs Home, or so it seemed, with a succession of big and small LSD's coming aboard. There were also a few Pouting and a number of reasonable size whiting too, but no sign of any unicorns.
We then tried an inshore wreck and another mark finding more of the same before going to another mark some 3 miles off Brighton. We had several good bites there and what felt like good fish, but on almost every occasion lost them within seconds. Some felt like they could have been good cod, but then Lance pulled up a Conger so now we are wondering if that was what the others were. A couple of times the hook length was bitten through and others they just dropped the bait. If they were all conger then it must have been like a nest of vipers down there!
David had a schoolie bass which went back, and between us we ended with around 7-8 species. The lack of Cod was disappointing, but the great company, and lovely conditions for November made up for it. My Facebook feed showed that the same week in the past has accounted for several good double figure Cod, but for the past few years they have failed to materialise. If there really is a seven year cycle as some believe then they should be back this year, but even the summer wreck fishing for them this year has been poor with only a couple of small ones for me.
Is there anywhere in the country that they are being caught in numbers?
Lance had to get back early evening for a family pre lockdown meal out so I dropped him in the marina before heading just outside off the wall to see if David and I could find anything whether that be Bass, Codling or even squid for a couple more hours in the dark, but not a nibble.
Hopefully I can find a few soon, further reports to come when I do get out........... 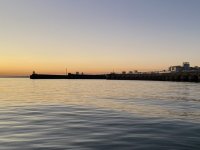 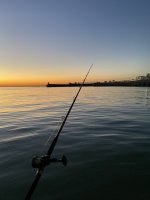 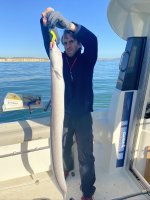 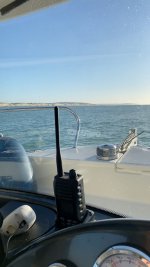 Shame on the lack of unicorns.
I guess they have not come in to graze yet
As idle as a painted ship
upon a painted ocean
​