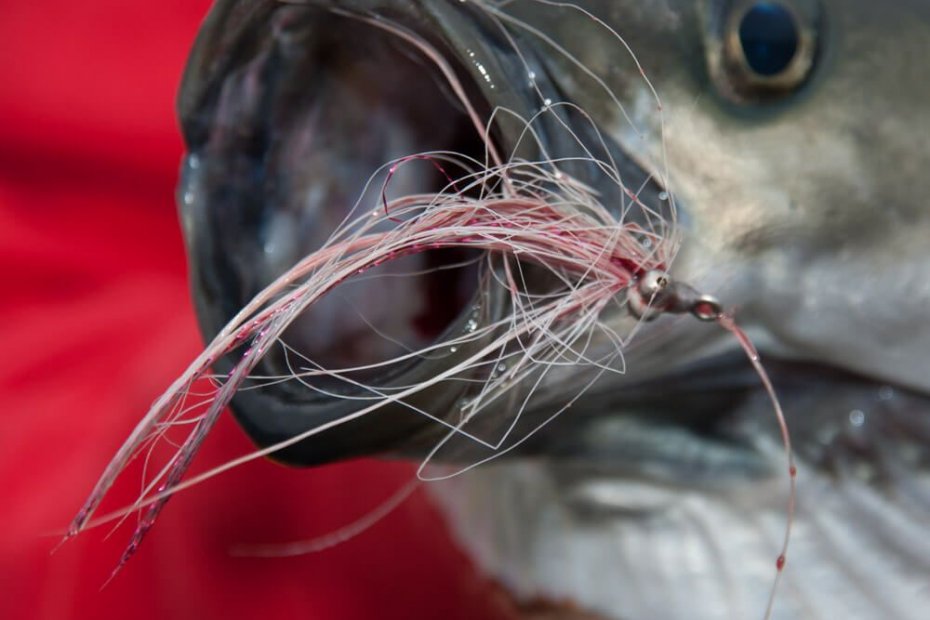 Without doubt coalfish from the shore on fly gear are one of the ultimate fighters, weight for weight, a shore angler will ever hook.

Only the far north of Scotland realistically, and some parts of Ireland, give us the chance to catch coalies over 3lbs off the shore on the fly. But it’s a different ball game when you go to Iceland!

I’ve caught good coalies southwest of the Icelandic capital Reykjavik, but the very best fishing I’ve experienced lies in the far north of the country in the western fjords and around Dalvik. Here the coalfish are available tight to shore by the thousand and they grow big. In my book any coalie caught from the shore over 5lbs on fly gear is a good one. And that should be your target!

I was fishing with Francis Jones from South Wales, Stirling angler John McInnes and Steve Mason owner of Icelandic Fishing Adventures as part of a four man team checking out the shore fishing potential in the Dalvik area. We’d chosen a small pier in the little town of Haugenes, just east of Dalvik, to fish a late morning, early evening session. The lads were going for the coalies and the cod on spinning gear, plus putting the bait rods out, but I’d got my fly rod with me and intended on sticking with this in an attempt to get a 5lb plus coalie out, but also catch some cod on the fly.

The lads went straight on the end of the pier, so I chose to fish down the harbour side of the pier casting out in an arc covering 30 to 70 degrees. I’d cast as far as I could, then instantly release a good amount of free line to ensure the fly got down as far as possible, and in the light tide run this actually put the fly hard on the seabed.

This tactic is a good ploy, as when you take up the slack line and pull the fly back towards you, initially it sweeps up off the seabed at a shallow angle, the angle then steepens as the fly rises further up in the water column. This initial sweep upwards attracts the cod, but once the fly is well up in the water the coalies become the target species.

The guys were hitting a few good coalies from the piers end straight away, mostly about the 4lb mark, then John shouted that something much bigger had grabbed the spinner and after a good struggle he landed an 8lb plus coalie. Francis also had coalies to close on 5lbs, so this was looking good, though the fish they’d hooked were well out of fly casting range. My first few casts produced just two small codling about the pound mark, then working a cast and retrieve much closer to the pier structure I felt a tap and the rod tip pressure increase and a harder fight resulted in the first coalfish of about 1½lbs. I got another on the next cast.

To try and scare off the smaller fish I went up to a bigger fly, a weighted Clouser in grey and white, a colour combo I’ve found especially effective for coalies, though they’re not overly choosy anyway. I cast this deliberately right down the side of the pier and released line to let the fly sink right to the bottom. I then began to strip slowly at first and I felt a few nips at the fly on the way up. This made me think that the fish wanted a faster retrieved fly, so next time I quickened the pace. This instantly paid off.

My left hand made two quick sharp pulls on the line as the fly came up off the seabed and on the third pull the rod whacked over and line poured off the reel. This was a good fish and it ran out from the pier end at first, then doubled back in towards the harbour making me strip loose line back in as fast as possible. As the line came tight the fish doubled back and ripped about 20yds of line off the reel in a single run spraying my face with saltwater as the reel spun.

Now the fish went deep and hung for a few moments, then as I applied more pressure took off for the harbour entrance at speed but staying deep and ripping line off the drag again. Still staying deep the rod tip pulsed as the fish swam tight to the seabed, then shook its head in response to the pull of the line. It made another short run, then came up in the water and again hung there. I could now see the white of the belly, but as the fish broke surface it bored off again and went right back to the seabed. By this time Steve was ready with the drop net and I really piled the power on the fish. It broke surface but still twisted and turned against the rod pressure. I brought the fish to the net and Steve lifted the prize ashore. It was a stunning looking coalie, fat bodied and thick behind the head. John weighed the fish for me at 5lb 13ozs. I caught two more decent coalies both about the 4lb plus mark in following casts then concentrated on the cod.

The cod were not close to the pier, they were out towards the harbour mouth where the water was a little deeper. Past experience has taught me that cod require a much slower retrieve with longer pauses between pulls. This is because the coalie has more muscle and can deliver instant acceleration when attacking prey. Cod are slower off the mark and need to build up speed prior to an attack.

I began with short tweaks on the line, then a single steady pull. Nothing doing! I lengthened the pulls to just one single pull, a long pause, then another pull. This worked and a cod about a pound came ashore. I had five or six small cod before I felt a better take and the rod tip pull over. This fought in the head shaking manner of a cod and though not a big fish it looked like it might have gone just over 2lbs. That was the best I could do. A couple of days later we fished a pier in Olafsfjordour and I did manage more coalfish to about 3lbs, plus a couple of cod about 2½lbs as well as smaller ones. I also lost a much better cod that felt twice the weight and this was backed up by John who caught a couple of good fish between 4 and 5lbs right down the side of the front of the pier on bait where I’d been working the fly.

Talking to Steve he’s seen coalfish to well over 10lbs taken on baits from some of these local piers and with consistent fishing some angler is going to hit one of these beasts on the fly rod before too long, and what a coup that would be, a 10lb coalie off the shore on the fly. It’s an aim of mine and there’s no better place to achieve this ambition than up here in the northern fjords of Iceland!

TACKLE TO TAKE
I fished a 10-weight, and that would be my first choice rod and about 9ft in length. I match it to a large arbour Partridge fly reel with a good 300yds of 30lb braid backing on just in case I hit a leviathan. The fly lines I use are, admittedly, experimental ones with a tungsten core to my own design to achieve IGFA standards and to sink unbelievably fast. They are not the easiest to cast, but you learn to compensate. Any good fast sink line will do though and I do like the Teeny sinking lines as an alternative.

I only use Fluorocarbon leaders, usually straight through 20lb for coalies, but 30lb if I think the fish warrant it. I don’t see the advantage in tapering a leader as sea flies are big and will turn over on their own weight volition. My leaders are about 8ft long, though I will go longer if the fish are coming short, just in case they can see the end of the fly line in very clear water.

Flies can vary. I like. Clouser patterns with weighted heads, though thinly dressed streamer flies with weighted eyes are also good. Carry some dull colours and always basic black and red flies that give a good silhouette in low light conditions, these with just a hint of silver flash to visually attract when the predator gets up close. In clear water by day bright colours such as yellow and orange, white and also pink work well. ALTERNATIVE FLY FISHING
In addition to the great coalfish and cod fishing on the fly, Steve can also arrange fly fishing for salmon, trout and char.

The local rivers around Dalvik carry good salmon, and also sea going char. These can be fished for on the fly and maybe you could combine a sea/freshwater fly fishing holiday. There are also some great trout lakes in the mountains that can produce some large fish, even double figure trout, so there’s plenty to fish for.

EATING OUT & ACCOMMODATION
Steve arranges all the accommodation and we stayed in a small local hotel with good clean rooms and an excellent breakfast.

Eating out is usually in garage restaurants which offer good fish and chips, minute steaks and similar meals for well under £10, or you can go to Pizza parlours where you’ll pay about £12 for a big pizza and a beer.

Prices in Iceland have come down appreciably due to the exchange rate over the past couple of years and it’s made a big difference.

CONTACTS, INFORMATION & TRAVEL DETAILS
Anglers World Holidays are the main booking agent for Icelandic Fishing Adventures and you can contact them at 46 Knifesmithgate, Chesterfield, Derbyshire S40 1RQ. Tel: 01246 220080, or e-mail enquiries@anglers-world.co.uk and via their website www.anglersworld.tv

If you need specific fishing information on the fishing and the venues, then you can also contact Steve Mason direct via e-mail at steve@dreamfishing.is or by telephone on 00 354 6180694. Their website also gives some good info and can be accessed at www.dreamfish.is

You can fly direct with Iceland Air or Iceland Express to Reykjavik from Manchester, London Heathrow, London Gatwick, Stansted, Glasgow etc. All flight details are available by accessing www.icelandair.is or www.icelandexpress.com