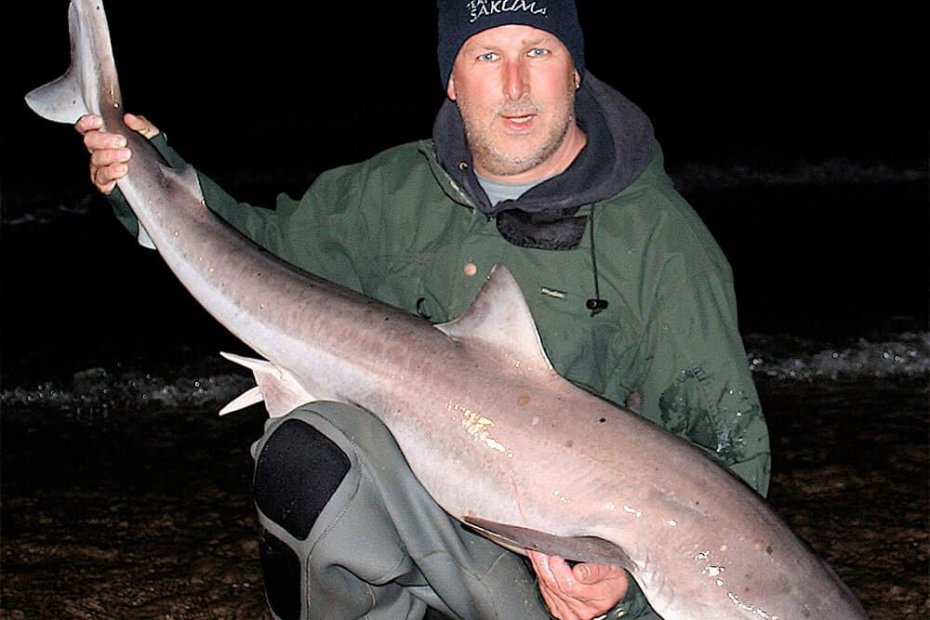 Putsborough Beach is a classic surf beach on the North Devon coast that lies at the Western end of Woolacombe bay. Three miles of golden sand lie between Putsborough and the popular seaside resort of Woolacombe. On hot summer days the beaches are packed with families, surfers and beach lovers. As evening approaches the air is filled with the aroma of barbecues as parties of people chill out enjoying the ambience of a summer night beside the sea.

After dark if the tide is right anglers seek small eyed ray and bass as they move close inshore in search of sandeels. Each summer the Combe Martin Sea Angling Club hold a specimen based match at the venue with the kind permission of the owner Rob Tucker. This year’s event was due to start at 09.30pm and finish at 2.30am. Booking in was between 8.00pm and 9.00pm with the weigh in at 3.30am. Anglers arrive at the car park ready to participate

Being club Chairman I had the job of taking the entry money and handing out the basic rules. It’s always a slightly anxious run up to the competition if involved in its organisation. How many will take part? Will we cover our costs? Will the weather hold?

This year a moderate North Westerly breeze was blowing straight into the shoreline making conditions less than perfect! However despite these conditions a steady stream of anglers arrived at the booking in point. Twenty-six competitors is our lowest turn out for several years but it’s enough to cover the clubs costs. There is a first prize of £100 cash and an impressive prize table donated by Sakuma and Ammodytes Ltd. So we hope that there are enough fish caught to win the prizes.
It’s always great to welcome numerous familiar faces that fish the event year on year.

Anglers can fish as far as the rocks at the west of the beach and as far as they choose to walk to the east towards Woolacombe. Competitors are asked to space themselves at a minimum of twenty yard intervals in the interests of both safety and to reduce the frustration of tangled lines. At 9.00pm with the booking in over and twenty-six competitors staking their claim to a piece of beach I set off to find a space on the beach. I settle for a section beside club member Derek Ferret.

This year has seen a radical change to the competition format with catch and release encouraged. Combe Martin Sea Angling Club Members are all carrying certified reliable electronic scales and are wearing bright fluorescent reflective waistcoats. Competitors are requested to locate one of these stewards to weigh and witness their catches enabling any fish to be returned alive to the water. The club ethos is now very much geared towards catch and release believing it to be immoral to kill fish simply to weigh and discard.

Next year the club intend to use glow sticks to identify steward’s location.

Small-eyed ray are the intended target species with dogfish and bass likely to feature in the prize list. Past results have varied from prolific catches of ray and dogfish to years when there have barely been enough fish to allow all prizes to be won.
I cast out my two rods as the sunsets upon a choppy sea ruffled by an onshore breeze. Ominous storm clouds fill the evening sky. I wade out into the surf and launch my baits. It is always a good feeling when the baits are eventually in the water with a whole session ahead. Whilst I didn’t expect much action in the first hour I was aware that previous matches had seen ray caught on the first cast. I set the reels ratchets to allow line to be pulled from the reel if a ray takes the bait and to give audible indication if I fail to see the bite on the rod tip. It was time for a warm drink and a packet of crisps before wandering over for a quick chat with Derek and Matt Jeffery a few yards along the beach. Small-eyed Ray are numerous at Putsborough

Back to the rods and time to reel in and move down the beach to catch up with the retreating water. Along the beach anglers lights flickered as they moved to cast or glance at their rod tips. I thought of how times had changed since I first fished this beach years ago. Back then paraffin pressure lamps would have been hissing along the beach emitting a constant warm glow. Now the cold blue light emitted by a multitude of LED’s marked the anglers in the night.

As low water approaches I think back to this competition two years ago when the following events unfolded.

“At close to midnight I heard a cry from Kevin. I hurried across the beach to join him, as he stood in the surf with hooped over rod, line being ripped from his reel. Somewhere out in the dark sea was a huge fish attempting to put distance between itself and the shoreline. Kevin is a master at taming big fish and eventually started to gain line using steady pressure. Fifty yards out to sea a fin surfaced in the searching beam of our headlights. I waded out into the surf as what was obviously a large tope surged powerfully back and forth. With adrenalin pumping through the veins I managed to grab the tope’s tail as waves pushed up to my chest, an anxious moment followed when I lost my grip risking a tirade of verbal abuse from Kevin if the fish had broken free. Fortunately I hung grimly on second time round.  The tope thrashed wildly as I struggled to the shore. Kev told me, “hang on if it bites through your waders Ill buy a new pair”. On the shoreline we gazed at the magnificent fish resting upon the sand. With no desire to see the fish retained a call was made to bring some scales. Combe Martin SAC rules allow tope to be returned alive in all competitions so long as the fish is accurately weighed and witnessed at 45lb 13oz. After careful weighing and photographing, the tope was slid into the surf and swam strongly away watched in awe by a huddle of anglers privileged to witness angling drama at its best.

Things are far different on this night and as the evening passes by and tide floods the rod tips fail to move. Mike Taylor lands a small undersize codling and there are rumours of fish being landed.

Despite a total lack of bites and a cool north wind there is still a certain appeal to the beach at night as the tide floods in and the fresh sea air is inhaled. Stars decorate the night sky as dark clouds clear away. The angler absorbs all of this whilst contemplating what swims beneath the dark waters into which the line extends. A small codling for Mike Taylor

As the tide pushes further up the beach its rapidity seems to gain pace requiring frequent retreating and recasting. With five minutes to go before the end of the match I am not too disappointed to reel in dismantle my tackle and set off for the weigh in.

Club Secretary Nick Phillips was ready and waiting when I arrived back at the car park, a table of prizes donated by Sakuma and Ammodytes laid out in readiness. The fishing has been really hard going with just three fish caught. Next year is the clubs thirtieth Putsborough competition at least that is what Nick our club secretary tells me. Let’s hope that next year the weather will be kinder.

Catches from this classic surf beach vary considerably with good catches of ray possible along with the inevitable dogfish. Large conger have been landed from the beach along with bass, tope, blonde ray and codling.

The Combe Martin Club promotes catch and release in its members only competitions. Encouraging its members to release fish not required for eating and capturing the memory on film with fellow members witnessing the careful weighing of fish.  The club no longer practices bag weight competitions except when on a fixed venue where fish can be weighed and released. Where possible specimen competitions are conducted with the fish weighed and witnessed. It is still possible to meet up at the end of the day and chat over a pint. What’s the point of carrying unwanted fish to the scales?

TACKLE AND TACTICS
Pulley rigs are widely used by many anglers whilst a standard paternoster will work just as well. I opt to use a pulley rig with a body of 100lb b.s mono combined with a hook length of 80lb b.s mono. A breakaway lead will anchor the rig to the seabed. Bait is sandeel impaled on a 5/0 Sakuma Manta long-shank hook. Mainline is 20lb b.s Berkely Big Game loaded onto Diawa SHV 20 and SHV 30 multipliers. The tactic I tend to employ is to utilise the higher line capacity of the 30 size reel to walk back up the beach on the flood tide leaving the bait a couple of hundred yards off the shoreline. The other rod will be fished conventionally at standard casting range. Sakuma hooks work a treat in the Putsborough Open Frozen sandeels are the top bait at Putsborough

CLOTHING
Even summer nights can be cold so always be prepared with adequate layers. Chest waders are a must. Fleece type jogging bottoms are ideal with long length thermal socks comfortable within. Wear a cotton tee shirt, thermal inner fleece and warm hoodie with a waterproof jacket or wading jacket to keep out the wind. A beanie style hat will keep the head warm and enables a headlight to be comfortably worn.